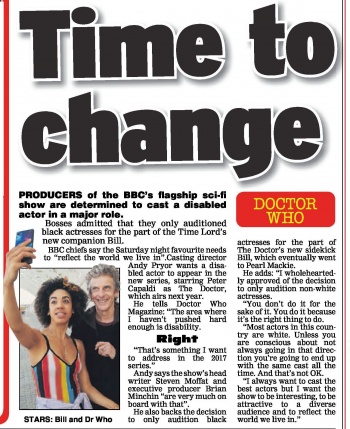 PRODUCERS of the BBC's flagship sci-fi show are determined to cast a disabled actor in a major role.

Bosses admitted that they only auditioned black actresses for the part of the Time Lord's new companion Bill.

BBC chiefs say the Saturday night favourite needs to "reflect the world we live in". Casting director Andy Pryor wants a disabled actor to appear in the new series, starring Peter Capaldi as The Doctor, which airs next year.

He tells Doctor Who Magazine: "The area where I haven't pushed hard enough is disability.

Andy says the show's head writer Steven Moffat and executive producer Brian Minchin "are very much on board with that".

He also backs the decision to only audition black actresses for the part of The Doctor's new sidekick Bill, which eventually went to Pearl Mackie.

He adds: "I wholeheartedly approved of the decision to only audition non-white actresses.

"You don't do it for the sake of it. You do it because it's the right thing to do.

"Most actors in this country are white. Unless you are conscious about not always going in that direction you're going to end up with the same cast all the time. And that's not OK.

"I always want to cast the best actors but I want the show to be interesting, to be attractive to a diverse audience and to reflect the world we live in."

Caption: STARS: Bill and Dr Who