Tonic for a science-fiction addiction 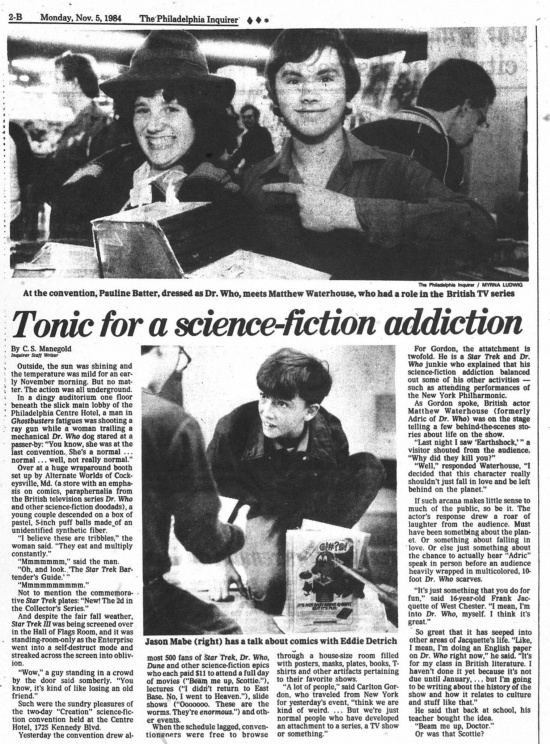 Over at a huge wraparound booth set up by Alternate Worlds of Cockeysville, Md. (a store with an emphasis on comics, paraphernalia from the British television series Dr. Who and other science-fiction doodads), a young couple descended on a box of pastel, 5-inch puff balls made of an unidentified synthetic fiber.

"I believe these are tribbles," the woman said. "They eat and multiply constantly."

Not to mention the commemorative Star Trek plates: "New! The 2d in the Collector's Series."

And despite the fair fall weather, Star Trek III was being screened over in the Hall of Flags Room, and it was standing-room-only as the Enterprise went into a self-destruct mode and streaked across the screen into oblivion.

"Wow," a guy standing in a crowd by the door said somberly. "You know, it's kind of like losing an old friend."

Such were the sundry pleasures of the two-day "Creation" science-fiction convention held at the Centre Hotel, 1725 Kennedy Blvd.

Yesterday the convention drew almost 500 fans of Star Trek, Dr. Who, Dune and other science-fiction epics who each paid $11 to attend a full day of movies ("Beam me up, Scottie."), lectures ("I didn't return to East Base. No, I went to Heaven."), slide shows ("Ooooooo. These are the worms. They're enormous.") and other events.

When the schedule lagged, conventiongoers were free to browse through a house-size room filled with posters, masks, plates, books, T-shirts and other artifacts pertaining to their favorite shows.

"A lot of people," said Carlton Gordon, who traveled from New York for yesterday's event, "think we are kind of weird... . But we're just normal people who have developed an attachment to a series, a TV show or something."

For Gordon, the attatchment is twofold. He is a Star Trek and Dr. Who junkie who explained that his science-fiction addiction balanced out some of his other activities - such as attending performances of the New York Philharmonic.

As Gordon spoke, British actor Matthew Waterhouse (formerly Adric of Dr. Who) was on the stage telling a few behind-the-scenes stories about life on the show.

"Last night I saw 'Earthshock,'" a visitor shouted from the audience. "Why did they kill you?"

"Well," responded Waterhouse, "I decided that this character really shouldn't just fall in love and be left behind on the planet."

If such arcana makes little sense to much of the public, so be it. The actor's response drew a roar of laughter from the audience. Must have been something about the planet. Or something about falling in love. Or else just something about the chance to actually hear "Adric" speak in person before an audience heavily wrapped in multicolored, 10-foot Dr. Who scarves.

"It's just something that you do for fun," said 16-year-old Frank Jacquette of West Chester. "I mean, I'm into Dr. Who, myself. I think it's great."

So great that it has seeped into other areas of Jacquette's life. "Like, I mean, I'm doing an English paper on Dr. Who right now," he said. "It's for my class in British literature. I haven't done it yet because it's not due until January, ... but I'm going to be writing about the history of the show and how it relates to culture and stuff like that."

He said that back at school, his teacher bought the idea.

Or was that Scottie?