Top Contenders for Dr Who Animation 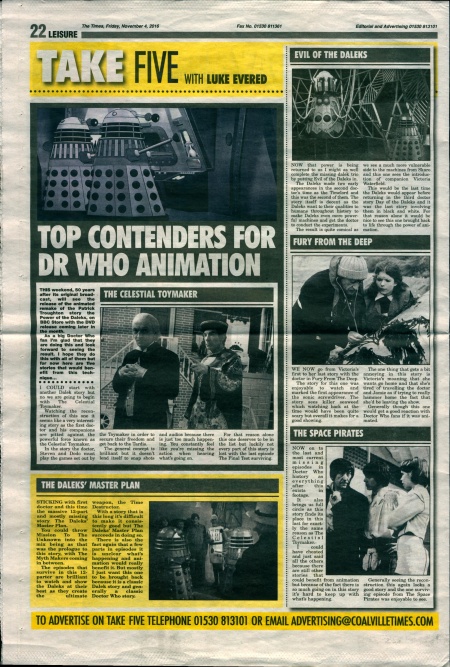 THIS weekend, 50 years after its original broadcast, will see the release of the animated remake of the Patrick Troughton story the Power of the Daleks, on BBC Store with the DVD release coming later in the month.

As a big Doctor Who fan I'm glad that they are doing this and look forward to seeing the result. I hope they do this with all of them but for now here are five stories that would benefit from this technique...

I COULD start with another Dalek story but no we are going to begin with The Celestial Toymaker.

Watching the reconstruction of this one it seems like a very interesting story as the first doctor and his companions are pitted against the powerful force known as the Celestial Toymaker.

In the story the doctor, Steven and Dodo must play the games set out by the Toymaker in order to secure their freedom and get back to the Tardis.

The general concept is brilliant but it doesn't lend itself to snap shots and audios because there is just too much happening. You constantly feel like you're missing the action when hearing what's going on.

For that reason alone this one deserves to be in the list but luckily not every part of this story is lost with the last episode The Final Test surviving.

STICKING with first doctor and this time the massive 12-part and mostly missing story The Daleks' Master Plan.

You could throw Mission To The Unknown into the mix being as that was the prologue to this story, with The Myth Makers coming in between.

The episodes that survive in this 12-parter are brilliant to watch and show the Daleks at their best as they create the ultimate weapon, the Time Destructor.

With a story that is this long it's difficult to make it consistently good but The Daleks' Master Plan succeeds in doing so.

There is also the fact again that a few parts in episodes it is unclear what's happening and animation would really benefit it. But mostly I just want this one to be brought back because it is a classic Dalek story and generally a classic Doctor Who story.

NOW that power is being returned to us I might as well complete the missing dalek trio by putting Evil of the Daleks in.

The Daleks made two early appearances in the second doctor's time as the Timelord and this was the second of them. The story itself is decent as the Daleks want to their qualities to humans throughout history to make Daleks even more powerful machines and get the doctor to conduct the experiments.

The result is quite comical as we see a much more vulnerable side to the machines from Skaro and this one sees the introduction of companion Victoria Waterfield.

This would be the last time the Daleks would appear before returning in the third doctor story Day of the Daleks and it was the last story involving them in black and white. For that reason alone it would be nice to see this one brought back to life through the power of animation.

WE NOW go from Victoria's first to her last story with the doctor in Fury From The Deep.

The story for this one was enjoyable to watch and marked the first appearance of the sonic screwdriver. The story sees killer seaweed which watching back at the time would have been quite scary but overall it makes for a good showing.

The one thing that gets a bit annoying in this story is Victoria's moaning that she wants go home and that she's tired of travelling the doctor and Jamie as if trying to really hammer home the fact that she'd be leaving the show.

Generally though this one would get a good reaction with Doctor Who fans if it was animated.

NOW on to the last and most current missing episodes in Doctor Who history as everything after this exists in footage.

It also brings us full circle as this story finds its place in this last for exactly the same reason as The Celestial Toymaker.

I could have cheated and just said all the others because there are still other stories that could benefit from animation but because of the fact there is so much going on in this story it's hard to keep up with what's happening.

Generally seeing the reconstruction this again looks a good story and the one surviving episode from The Space Pirates was enjoyable to see.