Top Picks to Be the New Time Lord 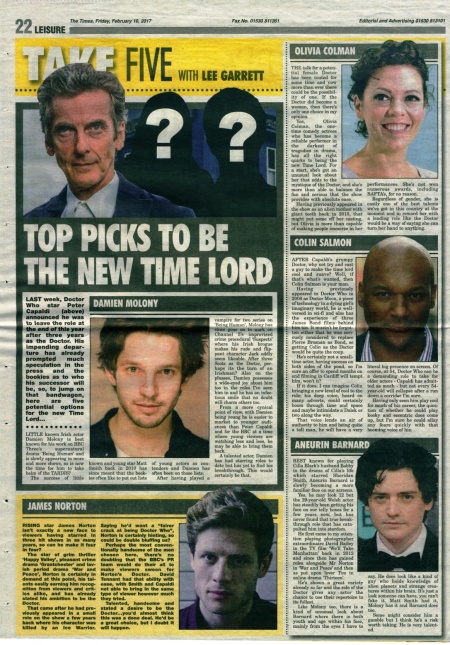 LAST week, Doctor Who star Peter Capaldi (above) announced he was to leave the role at

the end of this year after three years as the Doctor. His impending departure has already prompted much speculation in the press and the bookies as to who his successor will be, so, to jump on that bandwagon, here are five potential options for the new Time Lord...

LITTLE known Irish actor Damien Molony is best known for his work on BBC Three's supernatural drama 'Being Human' and is slowly appearing in more and more shows, so is now the time for him to take helm of the TARDIS?

The success of little known and young star Matt Smith back in 2010 has since meant that the bookies often like to put out lists of young actors as contenders and Damien has often been on those lists.

After having played a vampire for two series on Being Human, Molony has since gone on to work on Channel 5's improvised crime procedural 'Suspects' where his Irish brogue makes his rude and flippant character Jack oddly seem likeable. After three Scots as the Doctor, perhaps its the turn of an Irishman? Also on the plusses, Damien possesses a wide-eyed joy about him too in the roles I've seen him in and he has an infectious smile that no doubt will charm others too.

From a more cynical point of view, with Damien being young he is easier to market to younger audiences than Peter Capaldi and for the BBC at a time where young viewers are watching less and less, he may be able to bring them back.

A talented actor, Damien has had starring roles to date but has yet to find his breakthrough. This would certainly be that.

RISING star James Norton isn't exactly a new face to viewers having starred in three hit shows in as many years, so can he make it four in four?

The star of grim thriller 'Happy Valley', pleasant crime drama 'Grantchester' and lavish period drama 'War and Peace', Norton is certainly in demand at this point, his talents easily earning him recognition from viewers and critics alike, and has already stated his ambition to be the Doctor.

That came after he had previously appeared in a small role on the show a few years back where his character was killed by an Ice Warrior.

Saying he'd want a "fairer crack at being Doctor Who", Norton is certainly hinting, so could be double bluffing us?

Perhaps the most conventionally handsome of the men chosen here, there's no doubting that the BBC's PR team would do their all to make viewers swoon for Norton's Doctor. David Tennant had that ability with ease, with Smith and Capaldi not able to bring in the same type of viewer however much they tried.

Talented, handsome and stated a desire to be the Doctor...you'd almost think this was a done deal. He'd be a great choice, but I doubt it will happen.

THE talk for a potential female Doctor has been touted for some time and now more than ever there could be the possibility of one. If the Doctor did become a woman, then there's only one choice in my opinion.

Yes, Olivia Colman, the onetime comedy actress who has become a reliable performer in the darkest of tragedies in drama, has all the right quirks to being the new Time Lord. For a start, she's got an unusual look about her that adds to the mystique of the Doctor, and she's more than able to balance the fun and serious that the show provides with absolute ease.

Having previously appeared in the show as an alien mother with giant teeth back in 2010, that might put some off her casting, but Olivia is more than capable of making people immerse in her

AFTER Capaldi's grumpy Doctor, why not try and cast a guy to make the time lord cool and suave? Well, if that's what's wanted, then Colin Salmon is your man.

Having previously appeared in Doctor Who in 2008 as Doctor Moon, a piece of technology in a dying girl's imaginary world, he is well-versed in sci-fi and also has the experience of three James Bond films behind him too. It mustn't be forgotten either that he was seriously considered to replace Pierce Brosnan as Bond, so getting Colin as the Doctor would be quite the coup.

He's certainly not a smalltime actor, having success on both sides of the pond, so I'm sure an offer to spend months on end filming in Cardiff will tempt him, won't it?

If it does, I can imagine Colin bringing a new level of cool to the role; his deep voice, heard on many adverts, could certainly boom through time and space and maybe intimidate a Dalek or two along the way.

That voice lends an air of authority to him and being quite a tall man, he will have a very

BEST known for playing Cilia Black's husband Bobby in the drama of Cilia's life which starred Sheridan Smith, Aneurin Barnard is slowly becoming a more familiar face on our screens.

Yes, he may look 12 but the 29-year-old Welsh actor has steadily been getting his face on our telly boxes for a few years now, but has never found that true breakthrough role that has catapulted him into stardom.

He first came to my attention playing photographer extraordinaire David Bailey in the TV film 'We'll Take Manhattan' back in 2012 and since then has gained roles alongside Mr Norton in 'War and Peace' and then as put upon lover Tim in online drama 'Thirteen'.

He's shown a great variety already so far and the role of the Doctor gives any actor the chance to use their repertoire to its fullest.

Like Molony too, there is a kind of unusual look about Barnard where there is both youth and age within his face, mainly from the eyes I have to performances. She's not won numerous awards, including BAFTA's, for no reason.

Regardless of gender, she is easily one of the best talents we've got in this country at the moment and to reward her with a leading role like the Doctor would be a way of saying she can turn her hand to anything.

literal big presence on screen. Of course, at 54, Doctor Who can be a demanding role to take for older actors - Capaldi has admitted as much - but not every 54-year-old will collapse after a run down a corridor I'm sure.

Having only seen him play cool for much of his career, the question of whether he could play kooky and eccentric does come up, but I'm sure he could allay any fears quickly with that booming voice of his.

say. He does look like a kind of guy who holds knowledge of alien planets and strange creatures within his brain. It's just a look someone can have, you can't fake it. Matt Smith had it, Molony has it and Barnard does too.

Some might consider him a gamble but I think he's a risk worth taking. He is very talented.