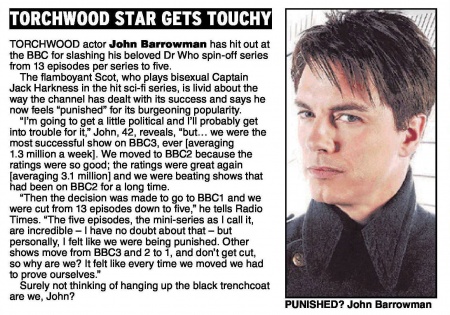 TORCHWOOD actor John Barrowman has hit out at the BBC for slashing his beloved Dr Who spin-off series from 13 episodes per series to five.

The flamboyant Scot, who plays bisexual Captain Jack Harkness in the hit sci-fi series, is livid about the way the channel has dealt with its success and says he now feels "punished" for its burgeoning popularity.

"I'm going to get a little political and I'll probably get into trouble for it," John, 42, reveals, "but... we were the most successful show on BBC3, ever [averaging 1.3 million a week]. We moved to BBC2 because the ratings were so good; the ratings were great again [averaging 3.1 million] and we were beating shows that had been on BBC2 for a long time.

"Then the decision was made to go to BBC1 and we were cut from 13 episodes down to five," he tells Radio Times. "The five episodes, the mini-series as I call it, are incredible — I have no doubt about that — but personally, I felt like we were being punished. Other shows move from BBC3 and 2 to 1, and don't get cut, so why are we? It felt like every time we moved we had to prove ourselves."

Surely not thinking of hanging up the black trenchcoat are we, John?