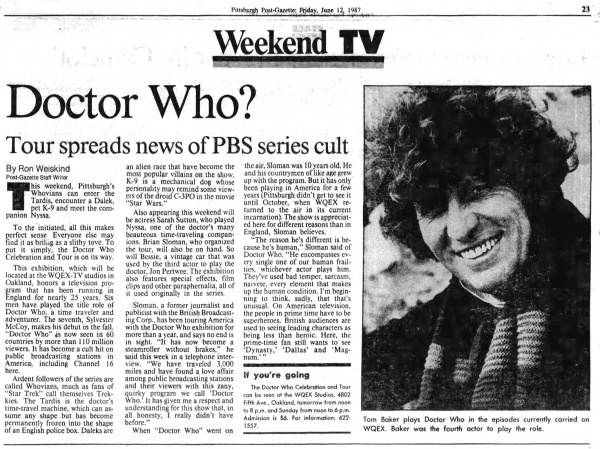 This weekend, Pittsburgh's Whovians can enter the Tardis, encounter a Dalek, pet K-9 and meet the companion Nyssa.

To the initiated, all this makes perfect sense Everyone else may find it as brihig as a slithy tove. To put it simply, the Doctor Who Celebration and Tour is on its way.

This exhibition, which will be located at the WQEX-TV studios in Oakland, honors a television program that has been running in England for nearly 25 years. Six men have played the title role of Doctor Who, a time traveler and adventurer. The seventh, Sylvester McCoy, makes his debut in the fall. "Doctor Who" is now seen in 60 countries by more than 110 million viewers. It has become a cult hit on public broadcasting stations in America; including Channel 16 here.

Ardent followers of the series are called Whovians, much as fans of "Star Trek" call themselves Trekkies. The Tardis is the doctor's time-travel machine, which can assume any shape but has become permanently frozen into the shape of an English police box. Daleks are an alien race that have become the most popular villains on the show. K-9 is a mechanical dog whose personality may remind some viewers of the droid C-3P0 in the movie "Star Wars."

Also appearing this weekend will be actress Sarah Sutton, who played Nyssa, one of the doctor's many beauteous time-traveling companions. Brian Sloman, who organized the tour, will also be on hand. So will Bessie, a vintage car that was used by the third actor to play the doctor, Jon Pertwee. The exhibition also features special effects, film clips and other paraphernalia, all of it used originally in the series.

Sloman, a former journalist and publicist with the British Broadcasting Corp., has been touring America with the Doctor Who exhibition for more than a year, and says no end is in sight. "It has now become a steamroller without brakes," he said this week in a telephone interview. "We have traveled 3,000 miles and have found a love affair among public broadcasting stations and their viewers with this zany, quirky program we call 'Doctor Who.' It has given me a respect and understanding for this show that, in all honesty, I really didn't have before."

When "Doctor Who" went on the air, Sloman was 10 years old. He and his countrymen of like age grew up with the program. But it has only been playing in America for a few years (Pittsburgh didn't get to see it until October, when WQEX returned to the air in its current incarnation). The show is appreciated here for different reasons than in England, Sloman believes.

"The reason he's different is because he's human," Sloman said of Doctor Who. "He encompasses every single one of our human frailties, whichever actor plays him. They've used bad temper, sarcasm, naivete, every element that makes up the human condition. I'm beginning to think, sadly, that that's unusual. On American television, the people in prime time have to be superheroes. British audiences are used to seeing leading characters as being less than heroic. Here, the prime-time fan still wants to see 'Dynasty,' Dallas' and 'Magnum.'"

The Doctor Who Celebration and Tour can be seen at the WQEX Studios, 4802 Fifth Ave., Oakland, tomorrow from noon to 8 p.m. and Sunday from noon to 6 p.m. Admission is $6. For information003A

Caption: Tom Baker plays Doctor Who in the episodes currently carried on WQEX. Baker was the fourth actor to play the role.