Track down the TARDIS in Medina 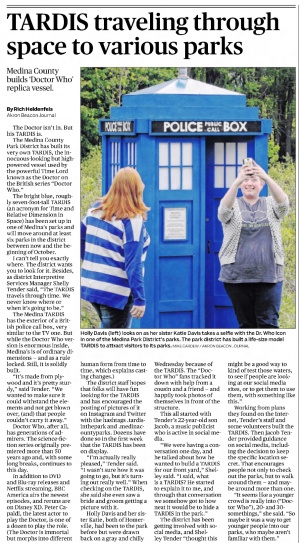 The Doctor isn't in. But his TARDIS is.

The Medina County Park District has built it very own TARDIS, the innocuous-looking but high-powered vessel used by the powerful Time Lord known as the Doctor on the British series Doctor Who.

The bright blue, roughly seven-foot-tall TARDIS (an acronym for Time and Relative Dimension in Space) has been set up in one of Medina's parks and will move around at least six parks in the district between now and the beginning of October.

I can't tell you exactly where. The district wants you to look for it. Besides, as district Interpretive Services Manager Shelly Tender said "The TARDIS travels through time. We never know where or when it's going to be."

The Medina TARDIS has the exterior of a British police call box, very similar to the TV one. But while the Doctor Who version is enormous inside, Medina's is of ordinary dimension. — and as a rule locked. Still, it is solidly built.

"It's made from plywood and it's pretty sturdy," said Tender. "We wanted to make sure it could withstand the elements and not get blown over, [and] that people couldn't carry it away."

Doctor Who, after all, has generations of admirers. The science-fiction series originally premiered more than 50 years ago and, with some long breaks, continues to this day.

In addition to DVD and Blu-ray releases and Netflix streaming, BBC America airs the newest episodes, and reruns are on Disney XD. Peter Capaldi, the latest actor to play the Doctor, is one of a dozen to play the role. (The Doctor is immortal but morphs into different human form from time to time, which explains casting changes.)

The district staff hopes that folks will have fun looking for the TARDIS and has encouraged the posting of pictures of it on Instagram and Twitter with the hashtags #tardisinthepark and #medinacountyparks. Dozens have done so in the first week that the TARDIS has been on display.

"I'm actually really pleased," Tender said. "I wasn't sure how it was going to go, but it's turning out really well." When checking on the TARDIS, she said she even saw a bride and groom getting a picture with it.

Holly Davis and her sister Katie, both of Homerville, had been to the park before but were drawn back on a gray and chilly Wednesday because of the TARDIS. The Doctor Who fans tracked it down with help from a cousin and a friend — and happily took photos of themselves in front of the structure.

This all started with Tender's 22-year-old son Jacob, a music publicist who is active in social media.

"We were having a conversation one day, and he talked about how he wanted to build a TARDIS for our front yard," Shelley said. "I said, what is a TARDIS? He started to explain it to me, and through that conversation we somehow got to how neat it would be to hide a TARDIS in the park."

The district has been getting involved with social media, and Shelley Tender "thought this might be a good way to kind of test those waters, to see if people are looking at our social media sites, or to get them to use them, with something like this."

Working from plans they found on the Internet, Tender's staff and some volunteers built the TARDIS. Then Jacob Tender provided guidance on social media, including the decision to keep the specific location secret. That encourages people not only to check out the parks, but to walk around them — and maybe around more than one.

"It seems like a younger crowd is really into (Doctor Who), 20- and 30-somethings," she said. "So maybe it was a way to get younger people into our parks, who maybe aren't familiar with them."

But not just young people. A Beacon Journal photographer and reporter who have both told their 40s goodbye were more than happy to take their own pictures of (and with) the TARDIS.

Caption: The TARDIS (Time and Relative Dimension in Space) is a time machine and spacecraft in the British science fiction television program that the Doctor travels around in from Gallifrey, his home planet.