Tracy is sidekick in charity video 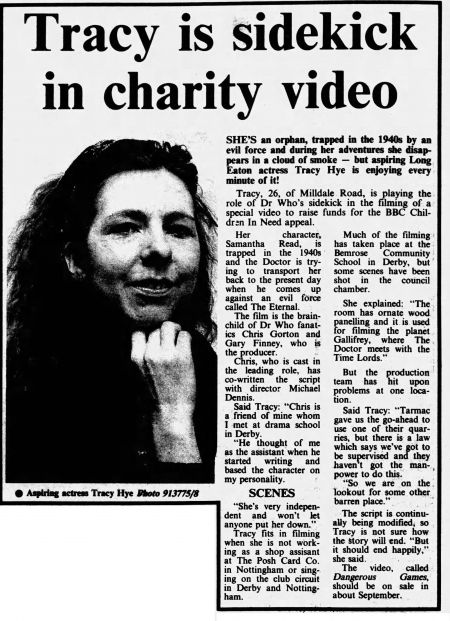 SHE'S an orphan, trapped in the 1940s by an evil force and during her adventures she disappears in a cloud of smoke — but aspiring Long Eaton actress Tracy Hye is enjoying every minute of it!

Tracy, 26, of Milldale Road, is playing the role of Dr Who's sidekick in the filming of a special video to raise funds for the BBC Children In Need appeal.

Her character, Samantha Read, is trapped in the 1940s and the Doctor is trying to transport her back to the present day when he comes up against an evil force called The Eternal.

The film is the brainchild of Dr Who fanatics Chris Gorton and Gary Finney, who is the producer.

Chris, who is cast in the leading role, has co-written the script with director Michael Dennis.

Said Tracy: "Chris is a friend of mine whom I met at drama school in Derby.

"He thought of me as the assistant when he started writing and based the character on my personality.

"She's very independent and won't let anyone put her down."

Tracy fits in filming when she is not working as a shop assisant at The Posh Card Co. in Nottingham or singing on the club circuit in Derby and Nottingham.

Much of the filming has taken place at the Bemrose Community School in Derby, but some scenes have been shot in the council chamber.

She explained: "The room has ornate wood panelling and it is used for filming the planet Gallifrey, where The Doctor meets with the Time Lords."

But the production team has hit upon problems at one location.

Said Tracy: "Tarmac gave us the go-ahead to use one of their quarries, but there is a law which says we've got to be supervised and they haven't got the manpower to do this.

"So we are on the lookout for some other barren place."

The script is continually being modified, so Tracy is not sure how the Story will end. "But it should end happily," she said.

The video, called Dangerous Games, should be on sale in about September.