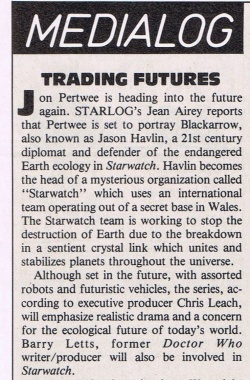 Jon Pertwee is heading into the future again. STARLOG's Jean Airey reports that Pertwee is set to portray Blackarrow, also known as Jason Havlin, a 21st century diplomat and defender of the endangered Earth ecology in Starwatch. Havlin becomes the head of a mysterious organization called "Starwatch" which uses an international team operating out of a secret base in Wales. The Starwatch team is working to stop the destruction of Earth due to the breakdown in a sentient crystal link which unites and stabilizes planets throughout the universe.

Although set in the future, with assorted robots and futuristic vehicles, the series, according to executive producer Chris Leach, will emphasize realistic drama and a concern for the ecological future of today's world. Barry Letts, former Doctor Who writer/producer will also be involved in Starwatch.