Traveling exhibit of the BBC's 'Doctor Who' stopping here 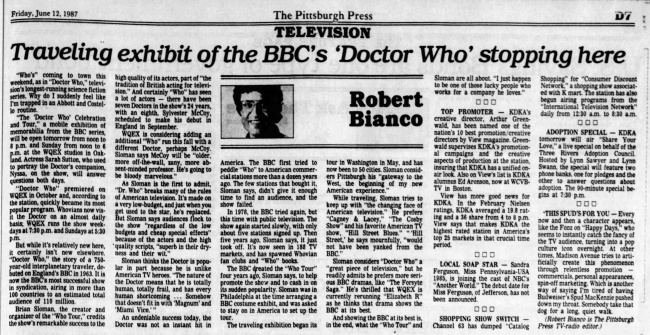 "Who's" coming to town this weekend, as in "Doctor Who," television's longest-running science fiction series. Why do I suddenly feel like I'm trapped in an Abbott and Costello routine.

"The 'Doctor Who' Celebration and Tour," a mobile exhibition of memorabilia from the BBC series, will be open tomorrow from noon to 8 p.m. and Sunday from noon to 6 p.m. at the WQEX studios in Oakland. Actress Sarah Sutton, who used to portray the Doctor's companion, Nyssa, on the show, will answer questions both days.

"Doctor Who" premiered on WQEX in October and, according to the station, quickly became its most popular program. Whovians now visit the Doctor on an almost daily basis; WQEX runs the show weekdays at 7:30 p.m. and Sundays at 5.30 p.m.

But while it's relatively new here, it certainly isn't new elsewhere. "Doctor Who," the story of a 750-year-old interplanetary traveler, debuted on England's BBC in 1963. It is now the BBC's most successful show in syndication, airing in more than 100 countries to an estimated total audience of 110 million.

Brian Sloman, the creator and organizer of the "Who Tour," credits the show's remarkable success to the high quality of its actors, part of "the tradition of British acting for television." And certainly "Who" has seen a lot of actors — there have been seven Doctors in the show's 24 years, with an eighth, Sylvester McCoy, scheduled to make his debut in England in September.

As Sloman is the first to admit, "Dr. Who" breaks many of the rules of American television. It's made on a very low-budget, and just when you get used to the star, he's replaced. But Sloman says audiences flock to the show "regardless of the low budgets and cheap special effects" because of the actors and the high quality scripts, "superb in their dryness and their wit."

Sloman thinks the Doctor is popular in part because he is unlike American TV heroes. "The nature of the Doctor means that he is totally human, totally frail, and has every human shortcoming ... Somehow that doesn't fit in with 'Magnum' and 'Miami Vice.'"

An undeniable success today, the Doctor was not an instant hit in America The BBC first tried to peddle "Who'. to American commercial stations more than a dozen years ago. The few stations that bought it. Sloman says, didn't give it enough time to find an audience, and the show failed.

In 1978, the BBC tried again, but this time with public television. The show again started slowly, with only about five stations signed up. Then five years ago, Sloman says, it just took off. It's now seen in 188 TV markets, and has spawned Whovian fan clubs and "Who" books.

The BBC created the "Who Tour" four years ago, Sloman says., to help promote the show and to cash in on its sudden popularity. Sloman was in Philadelphia at the time arranging a BBC costume exhibit, and was asked to stay on in America to set up the tour.

The traveling exhibition began its tour in Washington in May. and has now been to 50 cities. Sloman considers Pittsburgh his "gateway to the West, the beginning of my new American experience."

While traveling. Sloman tries to keep up with "the changing face of American television." He prefers "Cagney & Lacey," "The Cosby Show" and his favorite American TV show, "Hill Street Blues." "'Hill Street,' he says mournfully, "would not have been yanked from the BBC."

Sloman considers "Doctor Who" a "great piece of television," but he readily admits he prefers more serious BBC dramas, like "The Forsyte Saga." He's thrilled that WQEX is currently rerunning "Elizabeth R" as he thinks that drama shows the BBC at its best.

And showing the BBC at its best is, in the end, what the "Who Tour" and Sloman are all about. "I just happen to be one of those lucky people who works for a company be loves "