Travellers in time without a Tardis 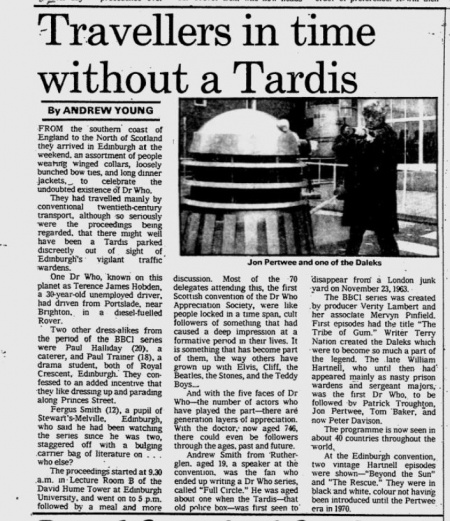 FROM the southern coast of England to the North of Scotland they arrived in Edinburgh at the weekend, an assortment of people wearing winged collars, loosely bunched bow ties, and long dinner jackets, to celebrate the undoubted existence of Dr Who.

They had travelled mainly by conventional twentieth-century transport, although so seriously were the proceedings being regarded, that there might well have been a Tardis parked discreetly out of sight of Edinburgh's vigilant traffic wardens.

One Dr Who, known on this planet as Terence James Hobden, a 30-year-old unemployed driver, had driven from Portslade, near Brighton. in a diesel-fuelled Rover.

Two other dress-alikes from the period of the BBC1 series were Paul Halliday (20), a caterer, and Paul Trainer (18). a drama student, both of Royal Crescent, Edinburgh: They confessed to an added incentive that they like dressing up and parading along Princes Street.

Fergus Smith (12), a pupil of Stewart's Melville, Edinburgh, who said he had been watching the series since he was two, staggered off with a bulging carrier bag of literature on ... who else?

The proceedings started at 9.30 .a.m. in Lecture Room B of the David Hume Tower at Edinburgh University, and went on to 5 p.m. followed by a meal and more discussion. Most of the 70 delegates attending this, the first Scottish convention of the Dr Who Appreciation Society, were like people locked in a time span. cult followers of something that had caused a deep impression at a formative period in their lives. It is something that has become part of them, the way others have grown up with Elvis, Cliff, the Beatles, the Stones, and the Teddy Boys.

And with the five faces of Dr Who—the number of actors who have played the part—there are generation layers of appreciation. With the doctor, now aged 746. there could even be followers through the ages. past and future.

Andrew Smith from Rutherglen, aged 19, a speaker at the convention, was the fan who ended up writing a Dr Who series, called "Full Circle." He was aged about one when the Tardis—that old police box—was first seen to disappear frond a London junk yard on November 23, 1963.

The BBC1 series was created by producer Verity Lambert and her associate Mervyn Penfield. First episodes had the title "The Tribe of Gum." Writer Terry Nation created the Daleks which were to become so much a part of the legend. The late William Hartnell, who until then had appeared mainly as nasty prison wardens and sergeant majors, was the first Dr Who, to be followed by Patrick Troughton, Jon Pertwee, Tom Baker, and now Peter Davison.

The programme is now seen in about 40 countries throughout the world.

At the Edinburgh convention, two vintage Hartnell episodes were shown—"Beyond the Sun" and "The Rescue." They were in black and white, colour not having been introduced until the Pertwee era in 1970.

Caption: Jon Pertwee and one of the Daleks