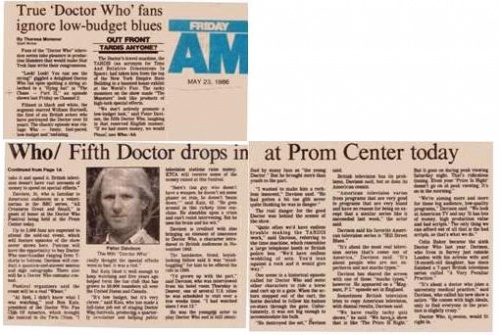 But fans of the 'Doctor Who' television series take pleasure in production blunders that would make Star Trek fans write their congressmen.

"Look! Look! You can see the string!" giggled a delighted Doctor Who fan upon spotting a string attached to a flying bat in "The Chase -- Part II," two and episode shown last Friday on Channel 2.

Filmed in black and white, the segment starred William Hartnell, the first of six British actors who have portrayed the Doctor over 23 years. The chaotic episode was vintage Doctor Who -- funny, fast-paced, low-budget and confusing.

The Doctor's travel machine, the TARDIS (an acronym for Time and Relative Dimensions in Space), had taken him from the top of the New York Empire State Building to a haunted house exhibit at the World's Fair. The tacky monsters on the show made the monsters look like products of high-tech special effects.

"We don't actively promote a low budget look," said Peter Davison, the fifth Doctor Who, laughing in that reserved English manor. "If we had more money we would take it and spend it. British television doesn't have vast amounts of money to spend on special effects."

Davison, 35, who is familiar to American audiences as a veterinarian in the BBC series "All Creatures Great and Small," is guest of honor at the Doctor Who Festival being held at the Prom Center today.

Up to 2,000 fans are expected to attend the sold out event which will feature episodes of the show never shown here. Patrons will have the opportunity to buy a Doctor Who merchandise ranging from T-shirts to buttons. Davison will conduct a question-and-answer session and sign autographs. There also will be a Doctor Who costume contest.

Festival organizers said the event will be a real "Whoot."

"At first, I didn't know what I was watching," said Ron Katz, president of the Doctor Who Fan Club of America, which brought the festival to the Twin Cities. "I really thought the special effects were so bad, it was a riot."

But Katz liked it well enough to keep watching and five years ago helped form the fan club that has grown to 50,000 members all over the United States and Canada.

"It's low budget, but it's very clever," said Katz, who has made a full-time job out of staging Doctor Who festivals, producing a quarterly newsletter and helping public television stations raise money. KTCA will receive some of that money raised at this festival.

"Here's this guy who doesn't have a weapon, he doesn't set some phaser on stun, he doesn't 'beam down,'" said Katz, 42. "He goes around in this rickety time machine. He stumbles upon a crisis and can't resist intervening. But he uses brain and his wit."

But Davison is credited with also bringing an element of innocence to Doctor Who, a character introduced a British audiences in November 1963.

The handsome, blond, boyish-looking fellow said it was "mind-boggling" for him to be offered but the role in 1980.

"I'd grown up with the part," said Davison, who was interviewed from his hotel room Thursday in Denver, one of several U.S. cities he was scheduled to visit over a few weeks time. "I had watched the show since I was 12."

He was the youngest actor to play Doctor Who and is still identified by many fans as "the young Doctor." But he brought more than youth to the part.

"I wanted to make and wrecked a reckless innocent," Davison said. "He had gotten a bit too glib never quite thinking he was in danger."

The real danger for the good Doctor was behind the scenes of the show.

"Quite often we'd have the endless trouble making the TARDIS work," said Davison, referring to the time machine, which resembles a large telephone booth or British police box. "We'd have endless wobbling of sets. You'd lean against a rock and it would give way."

One scene in a historical episode called for Doctor Who and some other characters to ride a horse up cart up to a gate. When the actors stepped out of the cart, the horse decided to follow his human co-stars through the gate. Unfortunately, it was not big enoughf to accommodate his bulk.

"He destroyed the set," Davison said.

British television has its problems, Davison said, but so does its American cousin.

"It's about the most real television series that's come out of America," Davison said. "It's about people who are not superheros and not macho types.

Davison has shared the screen with one of those macho types, however. He appeared on a "Magnum P.I." episode set in England.

"We have really tacky quiz shows," he said. We have a show that is like 'The Price is Right.' But a goes on during peak viewing Saturday night. That's ridiculous timing. Even your 'Price is Right' doesn't go at peak viewing. It's on in the morning."

"We're aiming more and more for those big audience, low-quality programs," Davison said. "We look at American TV and say 'It has lots of money, high production value and bad scripts.' The only thing we can afford out of all that is the bad scripts, so that's what we do."

Colin Baker became the sixth Doctor Who last year. Davison, who lives in Surrey just outside London with his actress wife and 18 month-old-daughter, has since finished the 7-part of British television series called "A Very Peculiar Practice."

"It's about a doctor who joins a university medical practice," said Davison, who called his new show a satire. "He comes with high ideals, only to find everyone in the practice is slightly crazy."

Doctor Who, it seems, would fit right in.