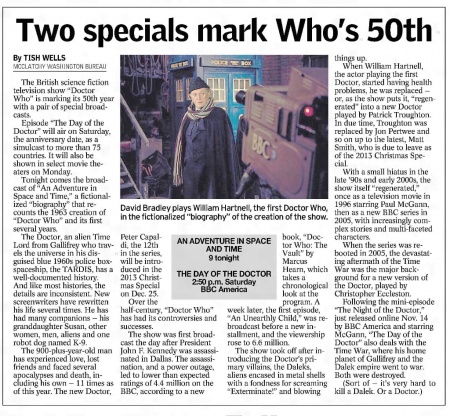 The British science fiction television show "Doctor Who" is marking its 50th year with a pair of special broadcasts.

Episode "The Day of the Doctor" will air on Saturday, the anniversary date, as a simulcast to more than 75 countries. It will also be shown in select movie theaters on Monday.

Tonight comes the broadcast of "An Adventure in Space and Time," a fictionalized "biography" that recounts the 1963 creation of "Doctor Who" and its first several years.

The Doctor, an alien Time Lord from Gallifrey who travels the universe in his disguised blue 1960s police box-spaceship, the TARDIS, has a well-documented history. And like most histories, the details are inconsistent. New screenwriters have rewritten his life several times. He has had many companions — his granddaughter Susan, other women, men, aliens and one robot dog named K-9.

The 900-plus-year-old man has experienced love, lost friends and faced several apocalypses and death, including his own — 11 times as of this year. The new Doctor, Peter Capaldi, the 12th in the series, will be introduced in the 2013 Christmas Special on Dec. 25.

Over the half-century, "Doctor Who" has had its controversies and successes.

The show was first broadcast the day after President John F. Kennedy was assassinated in Dallas. The assassination, and a power outage, led to lower than expected ratings of 4.4 million on the BBC, according to a new book, "Doctor Who: The Vault" by Marcus Hearn, which takes a chronological look at the program. A week later, the first episode, "An Unearthly Child," was rebroadcast before a new installment, and the viewership rose to 6.6 million.

The show took off after introducing the Doctor's primary villains, the Daleks, aliens encased in metal shells with a fondness for screaming "Exterminate!" and blowing things up.

When William Hartnell, the actor playing the first Doctor, started having health problems, he was replaced —or, as the show puts it, "regenerated" into a new Doctor played by Patrick Troughton. In due time, Troughton was replaced by Jon Pertwee and so on up to the latest, Matt Smith, who is due to leave as of the 2013 Christmas Special.

With a small hiatus in the late '90s and early 2000s, the show itself "regenerated," once as a television movie in 1996 starring Paul McGann, then as a new BBC series in 2005, with increasingly complex stories and multi-faceted characters.

When the series was rebooted in 2005, the devastating aftermath of the Time War was the major background for a new version of the Doctor, played by Christopher Eccleston.

Following the mini-episode "The Night of the Doctor," just released online Nov. 14 by BBC America and starring McGann, "The Day of the Doctor" also deals with the Time War, where his home planet of Gallifrey and the Dalek empire went to war. Both were destroyed.

Caption: David Bradley plays William Hartnell, the first Doctor Who, in the fictionalized "biography" of the creation of the show.