UGH calls up new monsters to face Dr. Who 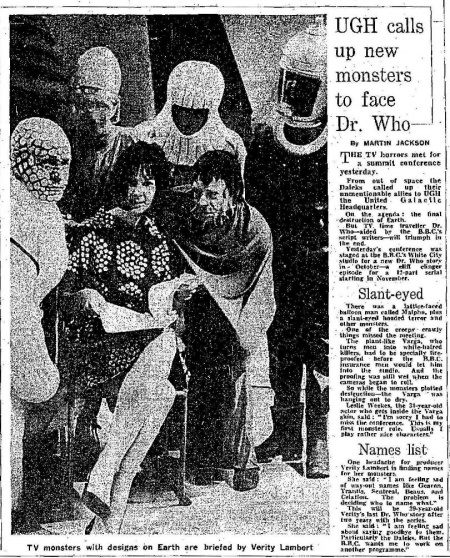 THE TV horrors met for a summit conference yesterday.

From out of space the Daleks called up their unmentionable allies to UGH the United Galactic Headquarters.

On the agenda: the final destruction of Earth.

But TV time traveler Dr. Who—aided by the B.B.C.'s script writers—will triumph in the end.

Yesterday's conference was staged al the B.B.C.'s White City studio for a new Dr Who story in October—a cliff clinger episode for a 12-part serial starling in November.

There was a lattice-faced balloon man called Malpha, plus a slant-eyed hooded terror and other monsters.

One of the creepy crawly things missed the meeting. The plant-like Varga, who turns men into white-hatred killers, bad to be specially fireproofed before the B.B.C. insurance men would let him into the studio. And the proofing was still wet when the cameras began to roll.

So while the monsters plotted destruction—the Varga was hanging out to dry.

Leslie Weekes, the 21-year-old actor who gets inside the Varga skin, said : "I'm sorry I had to miss the conference. This is my first monster role. Usually I play rather nice characters."

One headache for producer Verity Lambert is finding names for her monsters.

She said : "I am feeling sad of way-out names like Gearon, Trantis, Sentreal, Beaus, and Celation. The problem is deciding who to name what"

This will be 29-year-old Verity's last Dr. Who-story after two years with the series.

She said : "I am feeling sad about saying goodbye to them. Particularly the Daleks. But the BBC wants me to work on another programme.

Caption: TV monsters with designs on Earth are briefed by Verity Lambert