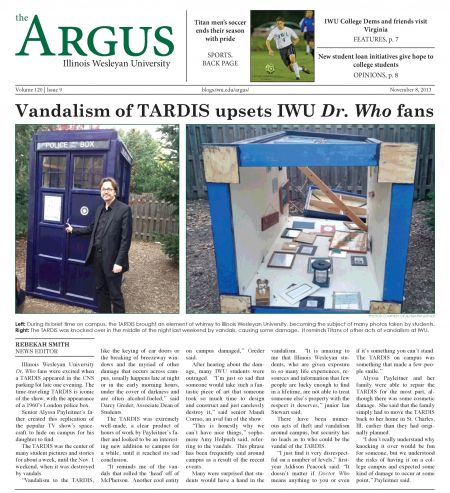 Illinois Wesleyan University Dr. Who fans were excited when a TARDIS appeared in the CNS parking lot late one evening. The time-traveling TARDIS is iconic of the show, with the appearance of a 1960's London police box.

Senior Alyssa Payleitner's father created this replication of the popular TV show's spacecraft to hide on campus for his daughter to find.

The TARDIS was the center of many student pictures and stories for about a week, until the Nov. 1 weekend, when it was destroyed by vandals.

"Vandalism to the TARDIS, like the keying of car doors or the breaking of breezeway windows and the myriad of other damage that occurs across campus, usually happens late at night or in the early morning hours, under the cover of darkness and are often alcohol-fueled," said Darcy Greder, Associate Dean of Students.

The TARDIS was extremely well-made, a clear product of hours of work by Payleitner's father and looked to be an interesting new addition to campus for a while, until it reached its sad conclusion.

It reminds me of the vandals that rolled the 'head' off of McPherson. Another cool entity on campus damaged," Greder said.

After hearing about the damage, many IWU students were outraged. "I'm just so sad that someone would take such a fantastic piece of art that someone took so much time to design and construct and just carelessly destroy it," said senior Mandi Corrao, an avid fan of the show.

'This is honestly why we can't have nice things," sophomore Amy Holpuch said, referring to the vandals. This phrase has been frequently said around campus as a result of the recent events.

Many were surprised that students would have a hand in the vandalism. It is amazing to me that Illinois Wesleyan students, who are given exposure to so many life experiences, resources and information that few people are lucky enough to find in a lifetime, are not able to treat someone else's property with the respect it deserves," junior Ian Stewart said.

There have been numerous acts of theft and vandalism around campus, but security has no leads as to who could be the vandal of the TARDIS.

"I just find it very disrespectful on a number of levels," first-year Addison Peacock said. It doesn't matter if Doctor Who means anything to you or even if it's something you can't stand. The TARDIS on campus was something that made a few people smile."

Alyssa Payleitner and her family were able to repair the TARDIS for the most part, although there was some cosmetic damage. She said that the family simply had to move the TARDIS back to her home in St. Charles, Ill. earlier than they had originally planned.

I don't really understand why knocking it over would be fun for someone, but we understood the risks of having it on a college campus and expected some kind of damage to occur at some point," Payleitner said.

Left: During its brief time on campus, the TARDIS brought an element of whimsy to Illinois Wesleyan University, becoming the subject of many photos taken by students. Right: The TARDIS was knocked over in the middle of the night last weekend by vandals, causing some damage. It reminds Titans of other acts of vandalism at IWU.