Visiting a land down under 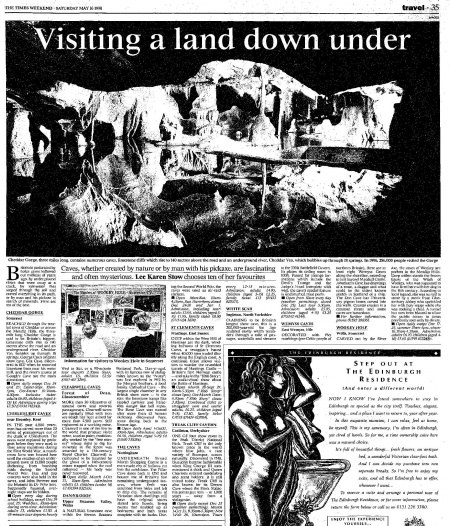 Caves, whether created by nature or by man with his pickaxe, are fascinating and often mysterious. Lee Karen Stow chooses ten of her favourites

Britain is perforated by holes: caves hollowed out millions of years ago, by underground rivers that wore away at a crack, by rainwater that seeped through the soil and carved everything in its path, or by man and his pickaxe in search of minerals. Here are ten of the best.

REACHED through the market town of Cheddar or across the Mendip Hills, the three-mile long Cheddar Gorge is said to be Britain's biggest. Limestone cliffs rise to 140 metres above the road and an underground river, Cheddar Yeo, bubbles up through 18 springs. George Cox's original show cave, Cox Cave, discovered in 1837 when he removed limestone from near his water mill, and the river's source at Gough's Cave are the main attractions.

IN THE past 4,000 years, man has carved more than 20 miles of passageways out of the chalk at Chislehurst. The caves were explored by geologists before they were used to store army munitions during the First World War. A mushroom farm was housed here until the creation of an underground town of 15,000 people sheltering from bombing raids during the Second World War. Jazz and pop concerts were also held in the caves, and John Pertwee met the Mutants in Dr Who here. Supposedly haunted, overnight stays are forbidden.

MORE than 30 kilometres of natural caves and covered passageways, Clearwell caves are partially filled with iron ore which has been mined for more than 2,500 years. Still registered as a working mine, Clearwell is one of the few in the world that produce violet ochre, used as paint, traditionally worked by the "free miners" whose right to dig for minerals in the forest was awarded by a 13th-century Royal Charter. Clearwell is rumoured to be haunted by the ghost of a 14thcentury miner trapped when the roof collapsed - his body was never recovered.

A NATURAL limestone cave within the Brecon Beacons National Park, Dan-yr-ogof, with its famous row of stalagmites known as the "Nuns", was first explored in 1912 by the Morgan brothers, a local family. Cathedral Cave - the largest single chamber in any British show cave - is the star: the limestone hangs like rippled curtains and stalactites dangle like bell ropes. The Bone Cave was named after more than 42 human skeletons discovered here, some dating back to the Bronze Age.

UNDERNEATH Broad Marsh Shopping Centre is a man-made city of hollows cut into the sandstone. The Pillar Cave dates back to 1250 and houses one of Britain's few remaining underground taneres, where flesh was scrubbed from hides and left to drip dry. The remains of Victorian slum dwellings still have the original stoves slotted into hovels, living rooms that doubled up as bedrooms and bath areas complete with tin baths. During the Second World War, the caves were used as air-raid shelters.

DEEP within the West Hill of Hastings are the dark, winding burrows of St Clements Caves, a smuggler's haunt when 40,000 men traded illicitly along the English coast. A combined ticket allows visitors to wander the crumbled turrets of Hastings Castle - Britain's first Norman castle - and take in the "1066 Story", an audio-visual show about the Battle of Hastings.

ONE OF four show caves in the Peak District National Park, Treak Cliff is the only known place in the world where blue john, a rare variety of fluorspar, occurs naturally. Discovered in 1748, blue john became fashionable when King George III commissioned a clock and Queen Charlotte ordered candelabra and scent holders. It is still mined today. Treak Cliff is also known for its Dream Cave where the Stork Stalactite points just 4cm - or 1,000 years - away from a stalagmite.

CLAIMING to be Britain's longest show cave, this is a 200,000- year-old Ice Age sculpted cavity which meanders through a mile of passages, waterfalls and streams to the 330ft Battlefield Cavern. In places its ceiling soars to 100ft. Famed for strange formations which include the Devil's Tounge and the Judge's Head (complete with wig), the cave's special feature is undisturbed mud pools.

DECORATED with Pict markings (pre-Celtic people of northern Britain), there are at least eight Wemyss Caves along the shoreline, extending to just beyond Macduff Castle. Jonathan's Cave has drawings of a swan, a dagger and what could be the oldest known sketch in Scotland of a ship. The Doo Cave has 17th-century pigeon boxes carved into the walls. Coastal erosion is a constant threat and some caves are hazardous.

CARVED out by the River Axe, the caves of Wookey are pockets in the Mendip Hills. Deep within stands the frozen figure of the Witch of Wookey, who was supposed to have lived here with her dog in the 16th century. According to local legend, she was turned to stone by a monk from Glastonbury Abbey who sprinkled her with holy water while she was cooking a child. A tunnel has now been blasted to allow the public access to areas previously seen only by divers.

Caption: Cheddar Gorge, three miles long, contains numerous caves, limestone cliffs which rise to 140 metres above the road and an underground river, Cheddar Yeo, which bubbles up through 18 springs. In 1996, 256,000 people visited the Gorge