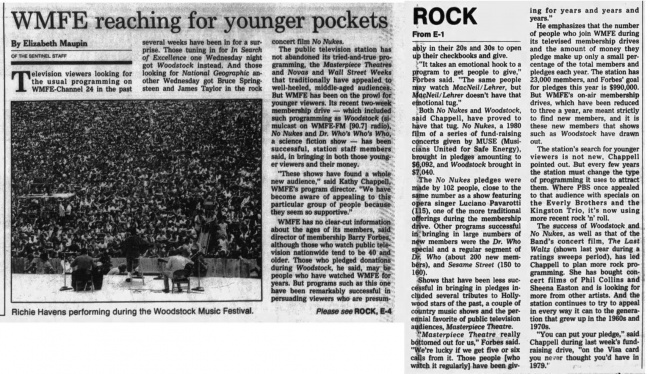 Television viewers looking for the usual programming on WMFE-Channel 24 in the past several weeks have been in for a surprise. Those tuning in for In Search of Excellence one Wednesday night got Woodstock instead. And those looking for National Geographic another Wednesday got Bruce Springsteen and James Taylor in the rock concert film No Nukes.

The public television station has not abandoned its tried-and-true programming, the Masterpiece Theatres and Novas and Wall Street Weeks that traditionally have appealed to well-heeled, middle-aged audiences. But WMFE has been on the prowl for younger viewers. Its recent two-week membership drive — which included such programming as Woodstock (simulcast on WMFE-FM [90.7] radio), No Nukes and Dr. Who's Who's Who, a science fiction show — has been successful, station staff members said, in bringing in both those younger viewers and their money.

"These shows have found a whole new audience," said Kathy Chappell, WMFE's program director. "We have become aware of appealing to this particular group of people because they seem so supportive."

WMFE has no clear-cut information about the ages of its members, said director of membership Barry Forbes, although those who watch public television nationwide tend to be 40 and older. Those who pledged donations during Woodstock, he said, may be people who have watched WMFE for years. But programs such as this one have been remarkably successful in persuading viewers who are presumably in their 20s and 30s to open up their checkbooks and give.

"It takes an emotional hook to a program to get people to give," Forbes said. "The same people may watch MacNeil/Lehrer, but MacNeil/Lehrer doesn't have that emotional tug."

Both No Nukes and Woodstock, said Chappell, have proved to have that tug. No Nukes, a 1980 film of a series of fund-raising concerts given by MUSE (Musicians United for Safe Energy), brought in pledges amounting to $6,092, and Woodstock brought in $7,040.

The No Nukes pledges were made by 102 people, close to the same number as a show featuring opera singer Luciano Pavarotti (115), one of the more traditional offerings during the membership drive. Other programs successful in bringing in large numbers of new members were the Dr. Who special and a regular segment of Dr. Who (about 200 new members), and Sesame Street (150 to 160).

Shows that have been less successful in bringing in pledges included several tributes to Hollywood stars of the past, a couple of country music shows and the perennial favorite of public television audiences, Masterpiece Theatre.

"Masterpiece Theatre really bottomed out for us," Forbes said. "We're lucky if we get five or six calls from it. Those people [who watch it regularly] have been giving for years and years and years."

He emphasizes that the number of people who join WMFE during its televised membership drives and the amount of money they pledge make up only a small percentage of the total members and pledges each year. The station has 23,000 members, and Forbes' goal for pledges this year is $990,000. But WMFE's on-air membership drives, which have been reduced to three a year, are meant strictly to find new members, and it is these new members that shows such as Woodstock have drawn out.

The station's search for younger viewers is not new, Chappell pointed out. But every few years the station must change the type of programming it uses to attract them. Where PBS once appealed to that audience with specials on the Everly Brothers and the Kingston Trio, it's now using more recent rock 'n' roll.

The success of Woodstock and No Nukes, as well as that of the Band's concert film, The Last Waltz (shown last year during a ratings sweeps period), has led Chappell to plan more rock programming. She has bought concert films of Phil Collins and Sheena Easton and is looking for more from other artists. And the station continues to try to appeal in every way it can to the generation that grew up in the 1960s and 1970s.

"You can put your pledge," said Chappell during last week's fundraising drive, "on the Visa card you never thought you'd have in 1979."