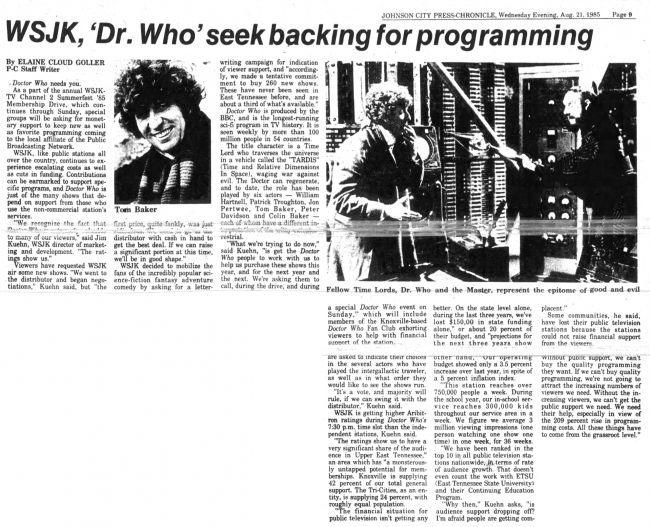 Doctor Who needs you.

As a part of the annual WSJK-TV Channel 2 Summerfest '85 Membership Drive, which continues through Sunday, special groups will be asking for monetary support to keep new as well as favorite programming corning to the local affiliate of the Public Broadcasting Network.

WSJK, like public stations all over the country, continues to experience escalating costs as well as cuts in funding. Contributions can be earmarked to support specific programs, and Doctor Who is just of the many shows that depend on support from those who use the non-commercial station's services.

"We recognize the fact that Doctor Who is extremely valuable to many of our viewers," said Jim Kuehn, WSJK director of marketing and development. "The ratings show us."

Viewers have requested WSJK air some new shows. "We went to the distributor and began negotiations," Kuehn said, but "the first price, quite frankly, was just ridiculous. We need to go to the distributor with cash in hand to get the best deal. If we can raise a significant portion at this time, we'll be in good shape."

WSJK decided to mobilize the fans of the incredibly popular science-fiction fantasy adventure comedy by asking for a letter writing campaign for indication of viewer support, and "accordingly, we made a tentative commitment to buy 260 new shows. These have never been seen in East Tennessee before, and are about a third of what's available."

Doctor Who is produced by, the BBC, and is the longest-running sci-fi program in TV history. It is seen weekly by more than 100 million people in 54 countries.

The title character is a Time Lord who traverses the universe in a vehicle called the "TARDIS" (Time and Relative Dimensions In Space), waging war against evil. The Doctor can regenerate, and to date, the role has been played by six actors — William Hartnell, Patrick Troughton, Jon Pertwee, Tom Baker, Peter Davidson and Colin Baker — each of whom have a different interpretation of the witty extraterrestrial.

"What we're trying to do now," said Kuehn, "is get the Doctor Who people to work with us to help us purchase these shows this year, and for the next year and the next. We're asking them to call, during the drive, and during a special Doctor Who event on Sunday," which will include members of the Knoxville-based Doctor Who Fan Club exhorting viewers to help with financial support of the station,

[ ... ] are asked to indicate their choices in the several actors who have played the intergalactic traveler, as well as in what order they would like to see the shows run.

"It's a vote, and majority will rule, if we can swing it with the distributor," Kuehn said.

WSJK is getting higher Aribitron ratings during Doctor Who's 7:30 p.m. time slot than the independent stations, Kuehn said.

"The ratings show us to have a very significant share of the audience in Upper East Tennessee," an area which has "a monstrously untapped potential for memberships. Knoxville is supplying 42 percent of our total general support. The Tri-Cities, as an entity, is supplying 24 percent, with roughly equal population.

"The financial situation for public television isn't getting any better. On the state level alone, during the last three years, we've lost $150,00 in state funding alone," or about 20 percent of their budget, and "projections for the next three years show [ ... ] other hand. Our operating budget showed only a 3.5 percent increase over last year, in spite of a 5 percent inflation index.

"This station reaches over 750,000 people a week. During the school year, our in-school service reaches 300,000 kids throughout our service area in a week. We figure we average 3 million viewing impressions (one person watching one show one time) in one week, for 36 weeks.

"We have been ranked in the top 10 in, all public television stations nationwide, in terms of rate of audience growth. That doesn't even count the work with ETSU (East Tennessee State University) and their Continuing Education Program.

"Why then," Kuehn asks, "is audience support dropping off? I'm afraid people are getting complacent."

Some communities, he said, have lost their public television stations because the stations could not raise financial support from the viewers [ ... ] without public support, we can't buy the quality programming they want. If we can't buy quality programming, were not going to attract the increasing numbers of viewers we need. Without the increasing viewers, we can't get the public support we need. We need their help, especially in view of the 209 percent rise in programming costs. All these things have to come from the grassroot level."

Caption: Fellow Time Lords, Dr. Who and the Master, represent the epitome of good and evil