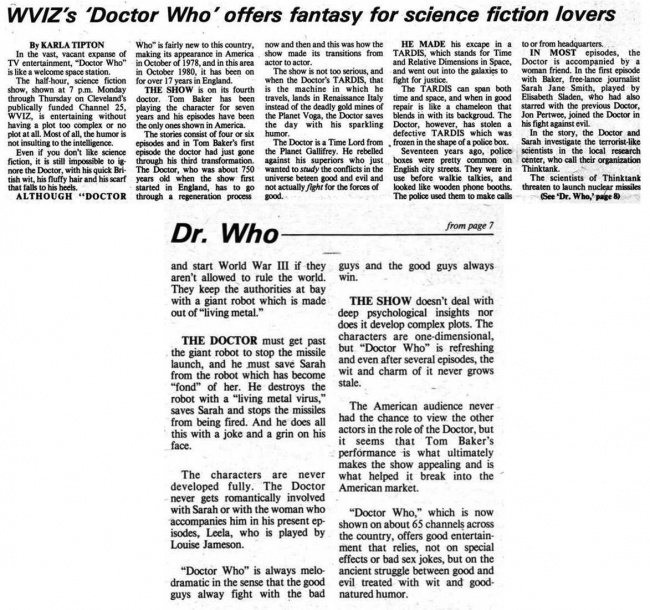 In the vast, vacant expanse of TV entertainment, "Doctor Who" is like a welcome space station.

The half-hour, science fiction show, shown at 7 p.m. Monday through Thursday on Cleveland's publically funded Channel 25, WVIZ, is entertaining without having a plot too complex or no plot at all. Most of all, the humor is not insulting to the intelligence.

Even if you don't like science fiction, it is still impossible to ignore the Doctor, with his quick British wit, his fluffy hair and his scarf that falls to his heels.

ALTHOUGH "DOCTOR Who" is fairly new to this country, making its appearance in America in October of 1978, and in this area in October 1980, it has been on for over 17 years in England.

THE SHOW is on its fourth doctor. Tom Baker has been playing the character for seven years and his episodes have been the only ones shown in America.

The stories consist of four or six episodes and in Tom Baker's first episode the doctor had just gone through his third transformation. The Doctor, who was about 750 years old when the show first started in England, has to go through a regeneration process now and then and this was how the show made its transitions from actor to actor.

The show is not too serious, and when the Doctor's TARDIS, that is the machine in which he travels, lands in Renaissance Italy instead of the deadly gold mines of the Planet Voga, the Doctor saves the day with his sparkling humor.

The Doctor is a Time Lord from the Planet Gallifrey. He rebelled against his superiors who just wanted to study the conflicts in the universe beteen good and evil and not actually fight for the forces of good.

HE MADE his excape in a TARDIS, which stands for Time and Relative Dimensions in Space, and went out into the galaxies to fight for justice.

The TARDIS can span both time and space, and when in good repair is like a chameleon that blends in with its backgroud. The Doctor, however, has stolen a defective TARDIS which was frozen in the shape of a police box.

Seventeen years ago, police boxes were pretty common on English city streets. They were in use before walkie talkies, and looked like wooden phone booths. The police used them to make calls to or from headquarters.

IN MOST episodes, the Doctor is accompanied by a woman friend. In the first episode with Baker, free-lance journalist Sarah Jane Smith, played by Elisabeth Sladen, Who had also starred with the previous Doctor, Jon Pertwee, joined the Doctor in his fight against evil.

In the story, the Doctor and Sarah investigate the terrorist-like scientists in the local research center, who call their organization Thinktank.

The scientists of Thinktank threaten to launch nuclear missiles and start World War III if they aren't allowed to rule the world. They keep the authorities at bay with a giant robot which is made out of "living metal."

THE DOCTOR must get past the giant robot to stop the missile launch, and he must save Sarah from the robot which has become "fond" of her. He destroys the robot with a "living metal virus," saves Sarah and stops the missiles from being fired. And he does all this with a joke and a grin on his face.

The characters are never developed fully. The Doctor never gets romantically involved with Sarah or with the woman who accompanies him in his present episodes, Leela, who is played by Louise Jameson.

THE SHOW doesn't deal with deep psychological insights nor does it develop complex plots. The characters are one-dimensional, but "Doctor Who" is refreshing and even after several episodes, the wit and charm of it never grows stale.

The American audience never had the chance to view the other actors in the role of the Doctor, but it seems that Tom Baker's performance is what ultimately makes the show appealing and is what helped it break into the American market.

"Doctor Who," which is now shown on about 65 channels across the country, offers good entertainment that relies, not on special effects or bad sex jokes, but on the ancient struggle between good and evil treated with wit and good-natured humor.