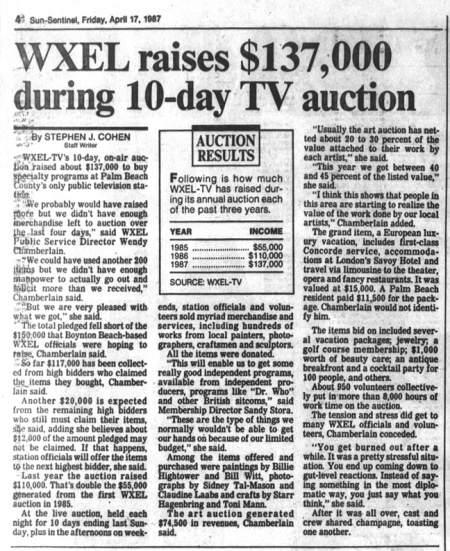 "We probably would have raised more but we didn't have enough merchandise left to auction over the last four days," said WXEL Public Service Director Wendy Chamberlain.

"We could have used another 200 items but we didn't have enough manpower to actually go out and solicit more than we received," Chamberlain said.

"But we are very pleased with what we got," she said.

The total pledged fell short of the $150,000 that Boynton Beach-based WXEL officials were hoping to raise, Chamberlain said.

So far $117,000 has been collected from high bidders who claimed the items they bought, Chamberlain said.

Another $20,000 is expected from the remaining high bidders who still must claim their items, she said, adding she believes about $12,000 of the amount pledged may not be claimed. If that happens, station officials will offer the items to the next highest bidder, she said.

At the live auction, held each night for 10 days ending last Sunday, plus in the afternoons on weekends, station officials and volunteers sold myriad merchandise and services, including hundreds of works from local painters, photographers, craftsmen and sculptors.

All the items were donated.

"This will enable us to get some really good independent programs, available from independent producers, programs like "Dr. Who" and other British sitcoms," said Membership Director Sandy Stora.

"These are the type of things we normally wouldn't be able to get our hands on because of our limited budget," she said.

Among the items offered and purchased were paintings by Billie Hightower and Bill Witt, photographs by Sidney Tal-Mason and Claudine Laabs and crafts by Starr Hagenbring and Toni Mann.

"Usually the art auction has netted about 20 to 30 percent of the value attached to their work by each artist," she said.

"This year we got between 40 and 45 percent of the listed value," she said.

"I think this shows that people in this area are starting to realize the value of the work done by our local artists," Chamberlain added.

The grand item, a European luxury vacation, includes first-class Concorde service, accommodations at London's Savoy Hotel and travel via limousine to the theater, opera and fancy restaurants. It was valued at $15,000. A Palm Beach resident paid $11,500 for the package. Chamberlain would not identify him.

The items bid on included several vacation packages; jewelry-, a golf course membership; $1,000 worth of beauty care; an antique breakfront and a cocktail party for 100 people, and others.

About 950 volunteers collectively put in more than 8,000 hours of work time on the auction.

The tension and stress did get to many WXEL officials and volunteers, Chamberlain conceded.

"You get burned out after a while. It was a pretty stressful situation. You end up coming down to gut-level reactions. Instead of saying something in the most diplomatic way, you just say what you think," she said.

After it was all over, cast and crew shared champagne, toasting one another.

Following is how much WXEL-TV has raised during its annual auction each of the past three years.