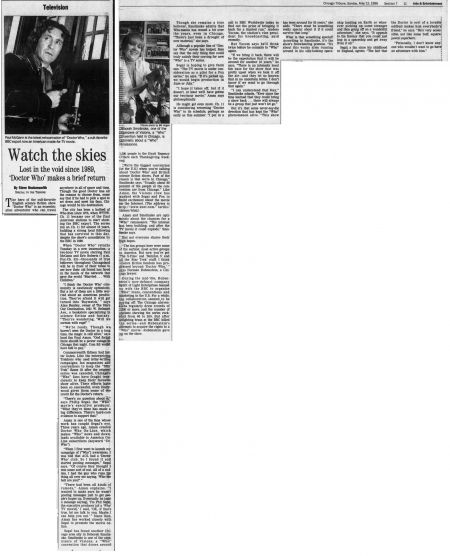 Lost in the void since 1989, 'Doctor Who' makes a brief return

The hero of the cult-favorite English science fiction show "Doctor Who" is an eccentric alien adventurer who can travel anywhere in all of space and time. Though the good Doctor has all the cosmos to choose from, some say that if he had to pick a spot to set down and meet his fans, Chicago would be his destination.

The city has been a hotbed of Who-dom since 1975, when WTTW-Ch. 11 became one of the first American stations to start showing the BBC export. The series ran on Ch. 11 for almost 16 years, building a strong local following that has survived to this day, despite the show's cancellation by the BBC in 1989.

When "Doctor Who" returns Tuesday in a new incarnation—a two-hour TV movie starring Paul McGann and Eric Roberts (7 p.m., Fox-Ch. 32)--thousands of true believers throughout Chicagoland will be in front of their tubes to see how their old friend has fared in the hands of the network that gave the world "Married With Children."

"I think the 'Doctor Who' community is cautiously optimistic. But a lot of them are a little worried about an American production. They're afraid it will get turned into 'Baywatch,'" says Alice Bentley, owner of The Stars Our Destination, 1021 W. Belmont Ave., a bookstore specializing in science fiction and fantasy. "They're wondering, 'Will we scream with rage?'"

"We're ready. Though we, haven't seen the Doctor in a long time, the magic is still alive," says local fan Paul Aman. "God forbid there should be a power outage in Chicago that night. Com Ed would have hell to pay."

Commonwealth Edison had better listen. Like the enterprising Trekkers who used letter-writing campaigns, fan magazines and conventions to keep the "Star Trek" flame lit after the original series was canceled, Chicago's "Who" fans have fought tenaciously to keep their favorite show alive. Their efforts have been so successful, even Hollywood gives them some of the credit for the Doctor's return.

"There's no question about it," says Philip Segal, the "Who" movie's executive producer. "What they've done has made a big difference. There's hard-core evidence to support that."

Aman is one of the fans whose work has caught Segal's eye. Three years ago, Aman created Doctor Who On-Line, which makes "Who" news and downloads available to America On-Line subscribers (keyword "Dr. Who").

"When I first went to launch my campaign of ["Who"] awareness, I was told that AOL had a 'Doctor Who' club. So I found it and started posting messages," Segal says. "Of course they thought I was some sort of nut. All of a sudden, I had the guy who runs the thing all over me saying, 'Who the hell are you?' "

"There had been all kinds of rumors," Aman explains. "I wanted to make sure he wasn't posting messages just to get peoples hopes up. Eventually he [sent a message saying], 'I'm Phil Segal, the executive producer [of a 'Who' TV movie]: I said, 'OK, if that's true, let me talk to you. Maybe I can help you out.' " Since then, Aman has worked closely with Segal to promote the movie online.

Segal has found another Chicago area ally in Deborah Smolinske. Smolinske is one of the organizers of Visions, a "Who" convention that draws around 1,500 people to the Hyatt Regency O'Hare each Thanksgiving weekend.

"We're the biggest convention [in the U.S.] when you're talking about 'Doctor Who' and British science fiction shows. Part of the reason is that we're in Chicago," Smolinske says. "Usually about 60 percent of the people at the convention are from Chicago." Like Aman, the Visions crew has worked with Segal and Fox to build excitement about the movie on the Internet. (The address is http://www.xnet.comi/~tardis/visions/html.)

Aman and Smolinske are optimistic about the chances for a "Who" renaissance. "The interest has been building, and after the TV movie it could explode," Smolinske says.

But not everyone shares their high hopes.

"The fan groups here were some of the earliest, most active groups in America. But now you've got 'The X-Files' and 'Babylon 5' and all the 'Star Trek' stuff. I think Science fiction fandom has progressed beyond 'Doctor Who,'" says Norman Rubenstein, a Chicago lawyer.

During the mid-'80s, Rubenstein's now-defunct company Spirit of Light Enterprises teamed up with the BBC to organize "Who" tours, conventions and marketing in the U.S. For a while, the collaboration seemed, to be paying off: The Chicago conventions regularly drew crowds of 7,000 or more, and the number of stations showing the series rocketed from 80 to 200. But after infighting brass at the BBC killed the series - and Rubenstein's attempts to acquire the rights to a "Who" movie - Rubenstein gave up on the show.

Though she remains a true believer, Smolinske admits that Who-mania has waned a bit over the years, even in Chicago. "There's just been a drought of new material," she says.

Although a popular line of "Doctor Who" novels has helped, fans say that the only thing that could truly satisfy their craving for new "Who" is a TV series.

Segal is hoping to give them one. "The TV movie is under consideration as a pilot for a Fox series," he says. "If it's picked up, we would begin production in June or July."

"I hope it takes off, but if it doesn't, at least we'll have gotten our two-hour movie," Aman says philosophically.

He might get even more. Ch. 11 is considering returning "Doctor Who" to its schedule, perhaps as early as this summer. "I put in a call to BBC Worldwide today to find out the price of bringing it back for a limited run," Anders Yocom, the station's vice president for broadcasting, said recently.

But Yocom says he'll think twice before he commits to "Who" again.

"If we bring it back, there will be the expectation that it will be around for another 16 years," he says. "There is an intensely loyal fan base for the show that was pretty upset when we took it off the air—and they let us known that in no uncertain terms. I don't know if we want to go through that again."

"I can understand that fear," Smolinske admits. "Ever since the fans learned that they could bring a show back ... there will always be a group that just won't let go."

But it's that same never-say-die devotion that has kept the "Who" phenomenon alive. "This show has been around for 33 years," she adds. "There must be something really special about it if it could survive that long."

What is that something special? According to Smolinske, it's the show's freewheeling premise. "It's about this wacko alien running around in his silly-looking space ship landing on Earth or wherever picking up some stranger and then going off on a wonderful adventure," she says. "It appeals to the fantasy that you could just hop in a spaceship and get away from it all."

Segal, a fan since his childhood in England, agrees. "The fact that the Doctor is sort of a lovable oddball makes him everybody's friend," he says. "lie's very accessible, not like some buff, square-jawed superhero.

"Personally, I don't know anyone who wouldn't want to go have an adventure with him."

Caption: Paul McGann is the latest reincarnation of "Doctor Who," a cult-favorite BBC export now an American made-for-TV movie.

Caption: Deborah Smolinske, one of the organizers of Visions, a "Who" convention held in Chicago, is optimistic about a "Who" renaissance.