We'd like to tell you about a new personal computer 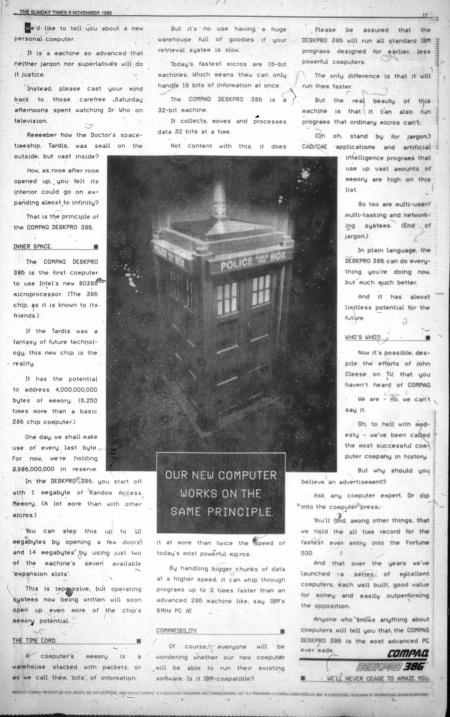 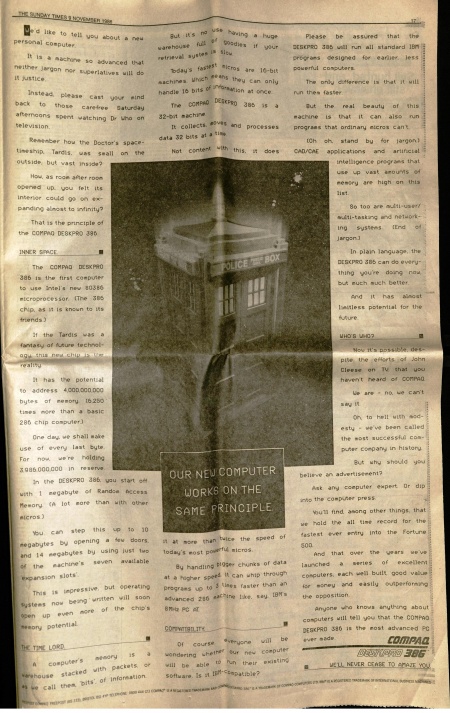 It is a machine so advanced that neither jargon nor superlatives will do it justice.

Instead, please cast your mind back to those carefree Saturday afternoons spent watching Dr Who on television.

Remember how the Doctor's space-timeship, Tardis, was small on the outside, but vast inside?

How, as room after room opened up, you felt its interior could go on expanding almost to infinity?

That is the principle of the COMPAQ DESKPRO 386.

If the Tardis was a fantasy of future technology, this new chip is the reality.

In the DESKPRO 386, you start off with 1 megabyte of Random Access Memory. (A lot more than with other micros.)

You can step this up to 10 megabytes by opening a few doors, and 14 megabytes by using just two of the machine's seven available expansion slots.

This is impressive, but operating systems now being written will soon open up even more of the chip's memory potential.

A computer's memory is stacked with packets, or , as we call them, 'bits' of information.

But it's no use having a huge warehouse full of goodies if you retrieval system is slow.

Today's fastest micros are 16-bit machines. Which means they can only handle 16 bits of information at once.

It collects, moves and processes data 32 bits at a time.

Not content with this, it does is at more than twice the speed of today's most powerful micros.

By handling bigger chunks of data at a higher speed, it can whip through programs up to 3 times faster than an advanced 286 machine like, say, IBM's 8MHz PC AT.

Of course, everyone will be wondering whether our new computer will be able to run their existing software. Is it IBM-compatible?

Please be assured that the DESKPRO 386 all standard IBM programs designed for earlier, less powerful computers.

The only difference is that it will run them faster.

But the real beauty of this machine is that it can also run programs that ordinary micros can't.

(Oh oh, stand by for jargon.) CAD/CAE applications and artificial intelligence programs that use up vast amounts of memory are high on this list.

So too are multi-user/ multi-tasking and networking systems. (End of jargon.)

In plain language, the DESKPRO 386 can do everything you're doing now, but much much better.

And it has almost limitless potential for the future.

Now it's possible, despite the efforts of John Cleese on TV, that you haven't heard of COMPAQ.

Oh, to hell with modesty - we've been called the most successful computer company in history.

But why should you believe an advertisement?

Ask any computer expert. Or dip into the computer press.

You'll find, among other things, that we hold the all time record for the fastest ever entry into the Fortune 500.

And that over launched a series of excellent computers, each well built, good value for money and easily outperforming the opposition.

Anyone who knows anything about computers will tell you that the COMPAQ DESKPRO 386 is ever made.