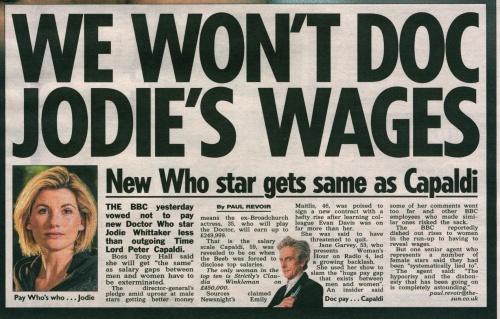 New Who star gets same as Capaldi

Boss Tony Hall said she will get "the same" as salary gaps between men and women have to be exterminated.

The director-general's pledge amid uproar at male stars getting better money means the ex-Broadchurch actress, 35, who will play the Doctor, will earn up to £249,999.

That is the salary scale Capaldi, 59, was revealed to be on when the Beeb was forced to disclose top salaries.

The only woman in the top ten is Strictly's Claudia Winkleman on £450,000.

Sources claimed Newsnight's Emily Maitlis, 46, was poised to sign a new contract with a hefty rise after learning colleague Evan Davis was on far more than her.

She was said to have threatened to quit.

She used her show to slam the "huge pay gap that exists between men and women". An insider said some of her comments went too far and other BBC employees who made similar ones risked the sack.

The BBC reportedly dished out rises to women in the run-up to having to reveal wages.

But one senior agent who represents a number of female stars said they had been "systematically lied to". The agent said: "The hypocrisy and the dishonesty that has been going on is completely astounding."