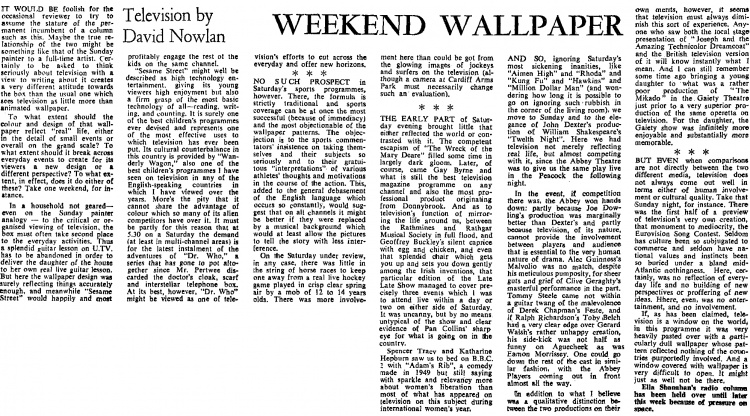 IT WOULD BE foolish for the occasional reviewer to try to assume the stature of the permanent incumbent of a column such as this. Maybe the true relationship of the two might be something like that of the Sunday painter to a full-time artist. Certainly to be asked to think seriously about television with a view to writing about it creates a very different attitude towards the box than the usual one which sees television as little more than animated wallpaper.

In a household not geared—even on the Sunday painter analogy — to the critical or organised viewing of television, the box must often take second place to the everyday activities. Thus a splendid guitar lesson on U.TV. has to be abandoned in order to deliver the daughter of the house to her own real live guitar lesson. But here the wallpaper design was surely reflecting things accurately enough, and meanwhile "Sesame Street" would happily and most profitably engage the rest of the kids on the same channel.

"Sesame Street" might well be described as high technology entertainment. giving its young viewers high enjoyment but also a firm grasp of the most basic technology of all—reading, writing, and counting. It is surely one of the best children's programmes ever devised and represents one of the most effective uses to which television has ever been put. Its cultural counterbalance in this country is provided by "Wanderly Wagon," also one of the best children's programmes I have seen on television in any of the English-speaking countries in which I have viewed over the years. More's the pity that it cannot share the advantage of colour which so many of its alien competitors have over it. It must be partly for this reason that at 5.30 on a Saturday the demand (at least in multi-channel areas) is for the latest instalment of the adventures of "Dr. Who," a series that has gone to pot altogether since Mr. Pertwee discarded the doctor's cloak, scarf and interstellar telephone box. At its best, however, "Dr. Who" might be viewed as one of television's efforts to cut across the everyday and offer new horizons.