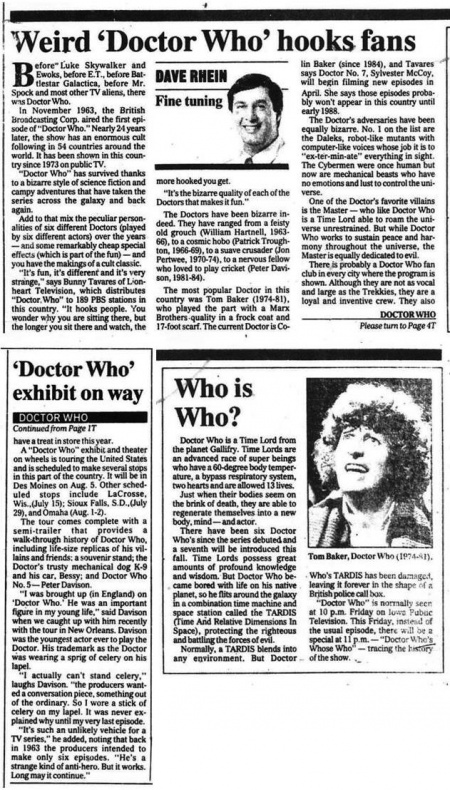 Before Luke Skywalker and Ewoks, before E.T., before Battlestar Galactica, before Mr. Spock and most other TV aliens, there was Doctor Who.

In November 1963, the British broadcasting Corp. aired the first episode of "Doctor Who." Nearly 24 years later, the show has an enormous cult following in 54 countries around the world. It has been shown in this country since 1973 on public TV.

"Doctor Who" has survived thanks to a bizarre style of science fiction and campy adventures that have taken the series across the galaxy and back again.

Add to that mix the peculiar personalities of six different Doctors (played by six different actors) over the years — and some remarkably cheap special effects (which is part of the fun) — and you have the makings of a cult classic.

"It's fun, it's different and it's very strange," says Bunny Tavares of Lionheart Television, which distributes "Doctor Who" to 189 PBS stations in this country. "It hooks people. You wonder why you are sitting there, but the longer you sit there and watch, the more hooked you get.

"It's the bizarre quality of each of the Doctors that makes it fun."

The most popular Doctor in this country was Tom Baker (1974-81), who played the part with a Marx Brothers quality in a frock coat and 17-foot scarf. The current Doctor is Colin Baker (since 1984), and Tavares says Doctor No. 7, Sylvester McCoy, will begin filming new episodes in April. She says those episodes probably won't appear in this country until early 1988.

The Doctor's adversaries have been equally bizarre. No. I on the list are the Daleks, robot-like mutants with computer-like voices whose job it is to "ex-ter-min-ate" everything in sight. The Cybermen were once human but now are mechanical beasts who have no emotions and lust to control the universe.

One of the Doctor's favorite villains is the Master — who like Doctor Who is a Time Lord able to roam the universe unrestrained. But while Doctor Who works to sustain peace and harmony throughout the universe, the Master is equally dedicated to evil.

There is probably a Doctor Who fan club in every city here the program is shown. Although they are not as vocal and large as the Trekkies, they are a loyal and inventive crew. They also have a treat in store this year.

A "Doctor Who" exhibit and theater on wheels is touring the United States and is scheduled to make several stops in this part of the country. It will be in Des Moines on Aug. 5. Other scheduled stops include LaCrosse, Wis.,(July 15); Sioux Falls, S.D.,(July 29), and Omaha (Aug. 1-2).

The tour comes complete with a semitrailer that provides a walk-through history of Doctor Who, including life-size replicas of his villains and friends; a souvenir stand; the Doctor's trusty mechanical dog K-9 and his car, Bessy; and Doctor Who No.5— Peter Davison.

"I was brought up (in England) on 'Doctor Who.' He was an important figure in my young life," said Davison when we caught up with him recently with the tour in New Orleans. Davison was the youngest actor ever to play the Doctor. His trademark as the Doctor Was wearing a sprig of celery on his lapel.

"I actually can't stand celery," laughs Davison. "the producers wanted a conversation piece, something out of the ordinary. So I wore a stick of celery on my lapel. It was never explained why until my very last episode.

"It's such an unlikely vehicle for a TV series," he added, noting that back in 1963 the producers intended to make only six episodes. "He's a strange kind of antihero. But it works. Long may it continue."

Doctor Who is a Time Lord from the planet Gallifry. Time Lords are an advanced race of super beings who have a 60-degree body temperature, a bypass respiratory system, two hearts and are allowed 13 lives. Just when their bodies seem on the brink of death, they are able to regenerate themselves into a new body, mind— and actor.

There have been six Doctor Who's since the series debuted and a seventh will be introduced this fall. Time Lords possess great amounts of profound knowledge and wisdom. But Doctor Who became bored with life on his native planet, so he flits around the galaxy in a combination time machine and space station called the TARDIS (time And Relative Dimensions In Space), protecting the righteous and battling the forces of evil.

Normally, a TARDIS blends into any environment. But Doctor Who's TARDIS has been damaged, leaving it forever in the shape of a British police call box.

"Doctor Who" is normally seen at 10 p.m. Friday on Iowa Public Television. This Friday, instead of the usual episode, there will be a special at 11 p.m. — "Doctor Who's Whose Who" — tracing the history of the show.