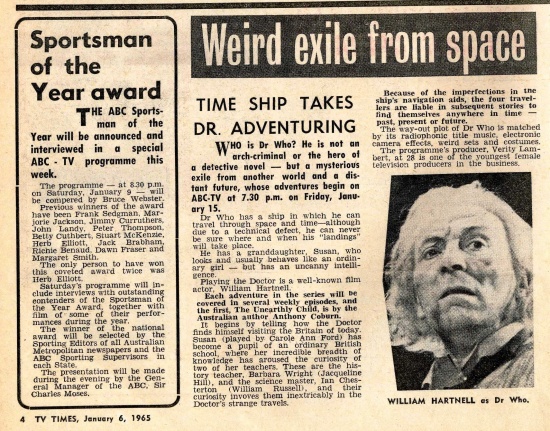 Who is Dr Who? He is not an arch-criminal or the hero of a detective novel — but a mysterious exile from another world and a distant future, whose adventures begin on ABC-TV at 7.30 p.m. on Friday, January 15.

Dr Who has a ship in which he can travel through space and time—although due to a technical defect, he can never be sure where and when his "landings" will take place.

He has a granddaughter, Susan, who looks and usually behaves like an ordinary girl — but has an uncanny intelligence.

Playing the Doctor is a well-known film actor, William Hartnell.

Each adventure in the series will be covered in several weekly episodes, and the first, The Unearthly Child, is by the Australian author Anthony Coburn.

It begins by telling how the Doctor finds himself visiting the Britain of today. Susan (played by Carole Ann Ford) has become a pupil of an ordinary British school, where her incredible breadth of knowledge has aroused the curiosity of two of her teachers. These are the history teacher, Barbara Wright (Jacqueline Hill), and the science master, Ian Chesterton (William Russell), and their curiosity invoves them inextricably in the Doctor's strange travels.

Because of the imperfections in the ship's navigation aids, the four travellers are liable in subsequent stories to find themselves anywhere in time — past, present or future.

The way-out plot of Dr Who is matched by its radiophonic title music, electronic camera effects, weird sets and costumes.

The programme's producer, Verity Lambert, at 28 is one of the youngest female television producers in the business.

Caption: WILLIAM HARTNELL as Dr Who.