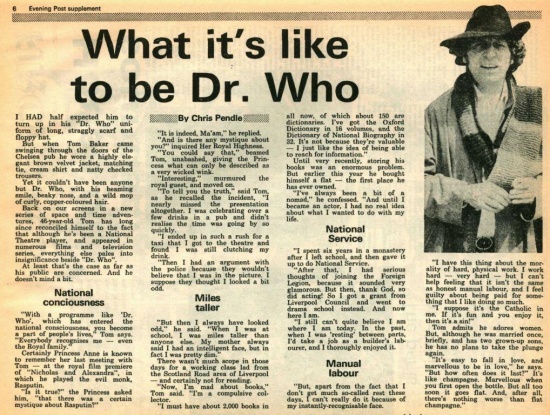 I HAD half expected him to turn up in his "Dr. Who" uniform of long, straggly scarf and floppy hat.

But when Tom Baker came swinging through the doors of the Chelsea pub he wore a highly elegant brown velvet jacket, matching tie, cream shirt and natty checked trousers.

Yet it couldn't have been anyone but Dr. Who, with his beaming smile, beaky nose, and a wild mop of curly, copper-coloured hair.

Back on our screens in a new series of space and time adventures, 46-year-old Tom has long since reconciled himself to the fact that although he's been a National Theatre player, and appeared in numerous films and television series, everything else pales into insignificance beside "Dr. Who".

At least that's the case as far as his public are concerned. And he doesn't mind a bit.

"With a programme like 'Dr. Who', which has entered the national consciousness, you become a part of people's lives," Tom says. "Everybody recognises me — even the Royal family."

Certainly Princess Anne is known to remember her last meeting with Tom — at the royal film premiere of "Nicholas and Alexandra", in which he played the evil monk, Rasputin.

"Is it true?" the Princess asked him, "that there was a certain mystique about Rasputin?"

"And is there any mystique about you?" inquired Her Royal Highness.

"You could say that," beamed Tom, unabashed, giving the Princess what can only be described as a very wicked wink.

"Interesting," murmured the royal guest, and moved on.

"To tell you the truth," said Tom, as he recalled the incident, "I nearly missed the presentation altogether. I was celebrating over a few drinks in a pub and didn't realise the time was going by so quickly.

"I ended up in such a rush for a taxi that I got to the theatre and found I was still clutching my drink.

"Then I had an argument with the police because they wouldn't believe that I was in the picture. I suppose they thought I looked a bit odd.

"But then I always have looked odd," he said. "When I was at school, I was miles taller than anyone else. My mother always said I had an intelligent face, but in fact I was pretty dim."

There wasn't much scope in those days for a working class lad from the Scotland Road area of Liverpool — and certainly not for reading.

"I must have about 2,000 books in all now, of which about 150 are dictionaries. I've got the Oxford Dictionary in 16 volumes, and the Dictionary of National Biography in 32. It's not because they're valuable — I just like the idea of being able to reach for information."

Until very recently, storing his books was an enormous problem. But earlier this year he bought himself a flat — the first place he has ever owned.

"I've always been a bit of a nomad," he confessed. "And until I became an actor, I had no real idea about what I wanted to do with my life.

"I spent six years in a monastery after I left school, and then gave it up to do National Service.

"After that, I had serious thoughts of joining the Foreign Legion, because it sounded very glamorous. But then, thank God, so did acting! So I got a grant from Liverpool Council and went to drama school instead. And now here I am.

"I still can't quite believe I am where I am today. In the past, when I was 'resting' between parts, I'd take a job as a builder's labourer, and I thoroughly enjoyed it.

"But, apart from the fact that I don't get much so-called rest these days, I can't really do it because of my instantly-recognisable face.

"I have this thing about the morality of hard, physical work. I work hard — very hard — but I can't help feeling that it isn't the same as honest manual labour, and I feel guilty about being paid for something that I like doing so much.

Tom admits he adores women. But, although he was married once, briefly, and has two grown-up sons, he has no plans to take the plunge again.

"It's easy to fall in love, and marvellous to be in love," he says. "But how often does it last?" It's like champagne. Marvellous when you first open the bottle. But all too soon it goes flat. And, after all, there's nothing worse than flat champagne."