When does a repeat become a TV classic? 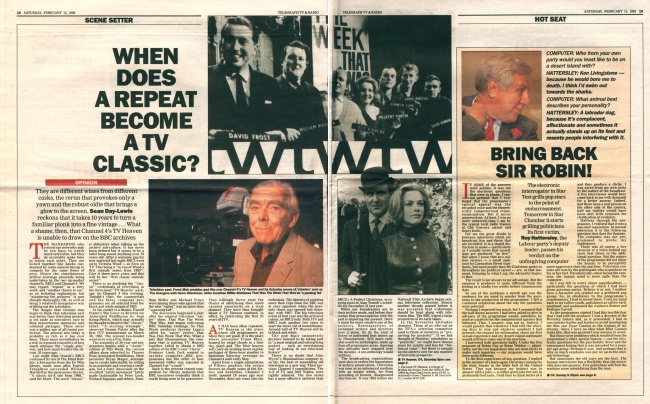 They are different wines from different casks, the rerun that provokes only a yawn and the robust oldie that brings a glow to the screen. Sean Day-Lewis reckons that it takes 10 years to turn a familiar plonk into a fine vintage ... What a shame, then, that Channel 4's TV Heaven is unable to draw on the BBC archives

THE MANDARINS who control our networks may be too busy to watch much television, but they do invariably make time to watch each other. They are locked together like hawks condemned by some natural hiccup to compete for the same items of prey. Hence the simultaneous archive scavenge presently being undertaken by the two up-market channels, BBC2 and Channel 4. We may regard "repeat" as a dirty word, and "another chance to see" as an irritating euphemism, but "plundering the archives" is now thought thoroughly OK, as well as being a relatively inexpensive way of filling out the schedules.

The danger that viewers may begin to think that television past was better than television present is set aside as executives race to fling monochrome memories into coloured packages. There never was a golden age of all-round perfection. The general mix today is probably as rich as it has ever been. There must nevertheless be a risk in repeated reminders of how much stronger the "single play" was, and how much fresher the sitcom, 20 years ago.

Last night Alan Yentob's BBC2 continued its run of The Mind Robber, a five-parter from the Dr Who library, made soon after Patrick Troughton succeeded William Hartnell as the eponymous Doctor. "A classic sci-fi tale from 1968," said the blurb. The word "classic" is obligatory when talking up the archive sub-culture. It has never been defined but it seems to be a label hung round anything over 10 years old. After a welcome gap for new material last night BBC2 went on to Victoria Wood — as Seen on TV. This being a "re-run of Wood's first comedy series from 1985". Give it three more years and this will be her "first classic comedy series".

There is no doubting the "classic" credentials of everything in the three-hour "TV Heaven" package on Channel 4 this evening. Tonight's clips, the commercials and the three complete programmes are all selected from the black and white output of 1963.

At the centre is a drama, Harold Pinter's The Lover as directed for Associated Rediffusion by Joan Kemp-Welch, which may actually be thought to deserve the "classic" label. "A sizzling triumph", observed Dennis Potter after the first ITV transmission on March 28, 1963. The sensual two-hander went on to win a Prix Italia.

The assembly of 29-year-old programmes begins with a "classic" edition of This Week, the current affairs show inherited by Thames from Associated Rediffusion. Here presenter Bryan Magee, attempting to create informality by sitting in an armchair and wearing a cardigan, led a fusty discussion on the so-called "satire movement" lately made fashionable by Peter Cook, Richard Ingrams and others. Jonathan Miller and Michael Frayn were among those who agreed that the new "satire" was no more than "a passing fad".

The discussion happened a year after the original television "satire" show, That Was The Week That Was, had begun enlivening BBC Saturday evenings. So This Week producer Jeremy Isaacs called his "satire" review That Was This Week That Was. What a pity that Illuminations, the company that is putting TV Heaven together, failed to obtain a 1963 edition of the BBC's own "classic". Producer Linda Zuck wanted to include complete BBC programmes but the offer of four unwanted trifles was rejected at Channel 4 as "a snub".

Such is the present crazed competition for library material that BBC executives evidently think it worth being seen to be possessive. They willingly threw away the chance of advertising their much vaunted superiority on a rival channel. They have thus brought about a TV Heaven confined, in effect, to celebrating the first 25 years of ITV.

AS HAS been often repeated, TV Heaven is the place where old programmes go when they are good. It is the place where presenter Frank Muir, framed by wispy clouds in a blue sky, plays god. The Muir heaven will carry on sending down regular packages of three-hour goodies to dominate Saturday evenings on Channel 4 until early May.

Apart from a single compilation of Fifties goodies, the series focuses on single years of the Sixties and Seventies. Channel 4 itself, opened 10 years ago next November, does not come into the reckoning. The absence of anything more than clips from the BBC was at once apparent when the heavenly chute was opened last Saturday, with 1967. The big television event of that year was the arrival of colour, on BBC2 only. Both ITV and BBC1 took another two years to start the move out of monochrome. Around half of TV Heaven will be in black and white.

The god Muir immodestly declares himself to be taking part in "a most original and enterprising project ... such an entertaining way of looking at our television history".

There is no doubt that John Wyver's Illuminations company is, so far, the best at assembling old television in a new way. Their previous Channel 4 compilations, The A-Z of TV and 1001 Nights, were rightly admired. The new series has a more effective skeleton than BBC2's A Perfect Christmas, occupying most of Alan Yentob's schedule for December 21 last year.

While our broadcasters are in their archive mode, and before they realise that preoccupation with the past is depleting the present, there is room for more creative use of the archives. Retrospectives of esteemed writers and directors have a point. So do the kind of linked or patterned lists drawn up by Illuminations. Still more valuable would be anthologies, made up from all programme areas, showing how attitudes have changed over the decades. A sex anthology would sell best.

The broadcasting organisations were slow to realise the importance of archive preservation. Television was seen as an ephemeral medium with an output which, far from ascending to heaven, disappeared into thin air. It was 1962 before the National Film Archive began serious television collection. Almost another decade passed before it was accepted that videotape should be kept along with television film. The BBC wiped a large proportion of its early tapes.

In the Seventies attitudes changed. Those of us who sat on the NFA's selection committee used to think of ourselves as "preserving for posterity". If we had thought of Nineties' schedulers as "posterity" we might have chosen more for quality and less for "historical value", but there is enough on the shelves now for any number of heavenly prospects.

Caption: Television past: Frank Muir presides god-like over Channel 4's TV Heaven and its Saturday reruns of 'classics' such as The Avengers with Honor Blackman, while Jonathan Miller dismisses That Was The Week That Was as 'a passing fad'