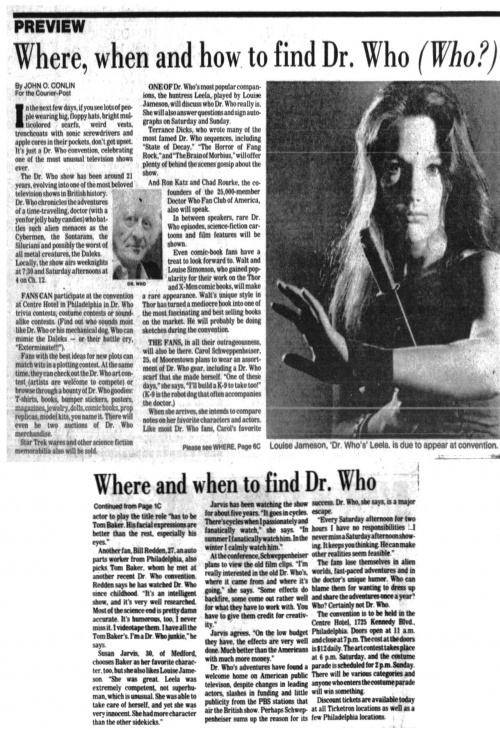 In the next few days, if you see lots of people wearing big, floppy hats, bright multicolored scarfs, weird vests, trenchcoats with sonic screwdrivers and apple cores in their pockets, don't get upset. It's just a Dr Who convention, celebrating one of the most unusual television shows ever.

The Dr. Who show has been around 21 years, evolving into one of the most beloved television shows in British history. Dr. Who chronicles the adventures of a time-traveling, doctor (with a yen for jelly baby candies) who battles such alien menaces as the Cybermen. the Sontarans, the Silurians and possibly the worst of all metal creatures, the Daleks. Locally, the show airs weeknights at 7:30 and Saturday afternoons at 4 on Ch. 12.

FANS CAN participate at the convention at Centre Hotel in Philadelphia in Dr. Who trivia contests, costume contests or sound-alike contests. (Find out who sounds most like Dr. Who or his mechanical dog. Who can mimic the Daleks — or their battle cry, "Exterminate!!!").

Fans with the best ideas for new plots can match wits in a plotting contest. At the same time, they can check out the Dr. Who art contest (artists are welcome to compete) or browse through a bounty of Dr. Who goodies T-shirts, books, bumper stickers, posters, books, prop replicas, model kits, you name it. There will even be two auctions of Dr. Who merchandise.

Star Trek wares and other science fiction memorabilia also will be sold.

ONE OF Dr. Who's most popular companions, the huntress Leela, played by Louise Jameson, will discuss who Dr. Who really is. She will also answer questions and sign autographs on Saturday and Sunday.

Terrance Dicks, who wrote many of the most famed Dr. Who sequences, including "State of Decay." "The Horror of Fang Rock." and "The Brain of Morbius," will offer plenty of behind the scenes gossip about the show.

And Ron Katz and Chad Rourke, the cofounders of the 25,000-member Doctor Who Fan Club of America, also will speak.

In between speakers. rare Dr. Who episodes, science-fiction cartoons and film features will be shown.

Even comic-book fans have a treat to look forward to. Walt and Louise Simonson, who gained popularity for their work on the Thor and X-Men comic books, will make a rare appearance. Walt's unique style in Thor has turned a mediocre book into one of the most fascinating and best selling books on the market. He will probably be doing sketches during the convention.

THE FANS, in all their outrageousness, will also be there. Carol Schweppenheiser, 25, of Moorestown plans to wear an assortment of Dr. Who gear. including a Dr. Who scarf that she made herself "One of these days." she says. "I'll build a K-9 to take too!" (K-9 is the robot dog that often accompanies the doctor.)

When she arrives she intends to compare notes on her favorite characters and actors. Like most Dr. Who fans, Carol's favorite actor to play the title role has to be Tom Baker His facial expressions are better than the rest. especially his eyes -

Another fan Bill Redden, 27. an auto parts worker from Philadelphia. also picks Tom Baker whom he met at another recent Dr Who convention Redden says he has watched Dr Who since childhood. "It's an intelligent show and it's very well researched Most of the science end is pretty damn accurate. It's humorous too. I never miss it. I videotape them I have all the Tom Baker's. I'm a Who junkie," he says.

Susan Jarvis, 30, of Medford. chooses Baker as her favorite character. too. but she also likes Louise Jameson 'She was great Leela was extremely competent. not superhuman, which is unusual She was able to take care of herself. and yet she was very innocent She had more character than the other sidekicks."

At the conference, Schweppenhetser plans to view the old film clips. "I'm really interested in the old Dr Who's, where it came from and where it's going," she says. "Some effects do backfire, some come out rather well for what they have to work with. You have to give them credit for creativity."

Jarvis agrees. "On the low budget they have, the effects are very well done. Much better than the Americans with much more money."

Dr Who's adventures have found a welcome home on American public television, despite changes in leading actors, slashes in funding and little publicity from the PBS stations that air the British show. Perhaps Schweppenheiser sums up the reason for its success. Dr Who, she says, is a major escape.

The fans lose themselves in alien worlds, fast-paced adventures and in the doctor's unique humor. Who can blame them for wanting to dress up and share the adventures once a year? Who? Certainly not Dr Who.

The convention is to be held in the Centre Hotel, 1725 Kennedy Blvd Philadelphia. Doors open at 11 am and close at 7pm. The cost at the doors is $12 daily. The art contest takes place at 6 p.m. Saturday and the costume parade is scheduled for 2 p.m. Sunday. There will be various categories and anyone who enters the costume parade will win something.

Caption: Louise Jameson, 'Dr Who's' Leela, is due to appear at convention.