Who'd Be a Who Girl? 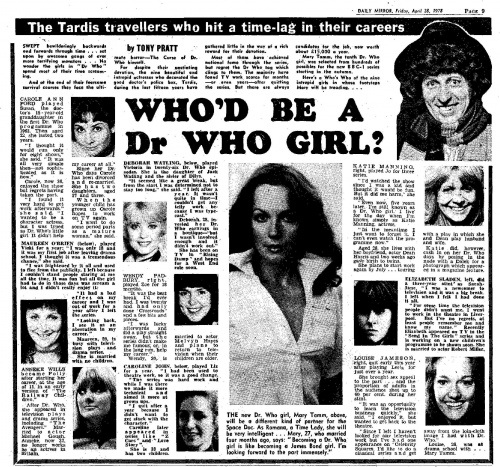 The Tardis travellers who hit a time-lag in their careers

SWEPT bewilderingly backwards and forwards through time ... set upon by awesome gangs of ever more terrifying monsters ... wonder the girls in "Dr Who" spend most of their time screaming.

And at the end of their fearsome survival courses they face the ultimate horror—The Curse of Dr. Who himself.

For despite their unstinting devotion, the nine beautiful and intrepid actresses who decorated the good doctor's police box, Tardis, during the last fifteen years have gathered little in the way of a rich reword for their devotion.

Most of them have achieved national fame through the series, but regret the Dr Who tog which clings to them. The majority have found T V work scarce for months —or even years—after quitting the series. But there are always candidates for the job, now worth about £15,000 a year.

Mary Tamm, the tenth Dr. Who girl, was selected from hundreds of possibles for the new B B C-1 series starting in the autumn.

Here's a Who's Who of the nine intrepid girls in whose footsteps Mary will be treading....

CAROLE ANN FORD played Susan, the doctor's 15-year-old granddaughter in the first Dr. Who programme in 1963. Then aged 22, she lasted two years.

"I thought it would run only for eight shows," she said. "It was all very simple then—not sophisticated as it is now."

Carole, now 36, enjoyed the show but regrets having taken the part, "I found it very hard to get work afterwards." "she said, "I wanted to be a character actress, but I was typed as Dr. Who's little girl. It didn't help my career at all."

Since her Dr. Who days Carole has been divorced and re-married. She has two daughters, aged 17 and three.

When the younger child has grown tip Carole hopes to work on T V again.

"I want to do some period parts as a mature woman," she said.

MAUREEN O'BRIEN (below), played Vicki for a year: "I was only 18 and it was my first job after leaving drama school. I thought it was a tremendous chance," she said.

"I was frightened by it all and used to flee from the publicity. I left because I couldn't stand people staring at me all the time. It was fun but all the girl had to do in those days was scream a lot and I didn't really enjoy it.

"It bad a bad effect on my career and I was out of work for a year after I left the series.

"Looking back, I see it as an aberration in my career."

Maureen, 29, is busy with television plays and drama series.

She is married with no children.

ANNEKE WILLS became Polly after starting her career at the age of 11, in an early version of "The Railway Children."

After Dr. Who, she appeared in television plays and drama series, including " The Avengers." Married to actor Michael Gough. Anneke, now 37, no longer works as an actress in Britain.

DEBORAH WATLING, below, played Victoria in twenty-six Dr. Who episodes. She is the daughter of Jack Watling and the sister of Dilys.

"It seemed like a great break, but from the start I was determined not to stay too long," she said. "I left after a year, It wasn't quite in time-I couldn't get any telly work because I was typecast."

Deborah, 28, invested her Dr. Who earnings in a boutique—"but I wasn't involved enough and it didn't work out."

She has been on TV in "Rising Damp" and hopes for a West End role soon.

"It was the best break I ever had. I was twenty and had only done 'Crossroads' and a few bits and pieces.

"I was lucky afterwards and did a play straight away, but the series didn't make me famous; or, in the long run, help my career,"

Wendy, 30, is married to actor Melvyn Hayes and plans to return to television when their children are older,

CAROLINE JOHN, below, played Lis for a year. "I had been used to theatre work, so it was a good change. "The series was hard work and while I was there we made it more technical and aimed it more at grown ups.

"I quit after a year because I didn't want to get stuck with the character."

She is 33 and has two children.

"I'd watched the show since I was a kid and thought it would be fun. But it did me harm," she said.

"Even now, five years later, I'm still known as a Dr. Who girl,' I live for the day when I'm known simply as Katie Manning, actress.

"In the meantime I just want to forget it. I can't even watch the programme now."

Aged 28, she lives with her boyfriend, actor Dean Harris and two weeks ago gave birth to twins.

She plans to start work again by July ... touring with a play in which she and Dean play husband and wife.

Katie did, however, cash in on her Dr. Who days by posing in the nude with a Dalek for a photograph which appeared in a magazine feature.

ELIZABETH SLADEN, left, did a three-year stint as Sarah-Jane. "I was a newcomer to television and it was a big break. I left when I felt I had done it all.

"For some time the television people didn't want me. I went to work in the theatre in Liverpool. But I've no regrets, at least people remember me and know my name." Recently Elizabeth appeared on T V in the "Send In The Girls" series and is working on a new children's programme to be shown soon. She is married to actor Robert Miller.

LOUISE JAMESON, right, quit early this year after playing Leela, for just over a year.

She brought sex appeal to the part ... and the proportion of adults in the audience shot up to 60 per cent. during her stint.

"It was an opportunity to learn the television business quickly," she said. "I enjoyed it, but wanted to get back to the theatre.

"Since I left I haven't looked for any television work but I've had one appearance on Celebrity Squares. I'd like to do a classical series and get away front the loin-cloth image I had with Dr. Who."

Caption: THE new Dr. Who girl, Mary Tamm, above, will be a different kind of partner for the Space Doc. As Romano, a Time Lady, she will be very intelligent ... Mary, 27, who married four months ago, says: " Becoming a Dr. Who girl is like becoming a James Bond girl. I'm looking forward to the part immensely."