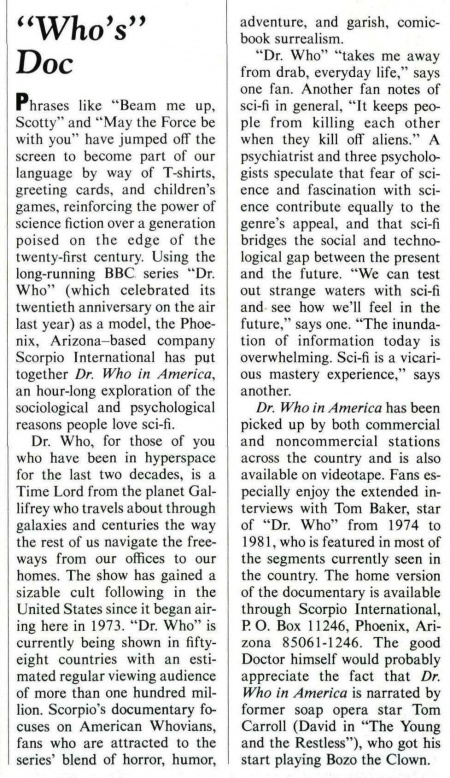 Phrases like "Beam me up, Scotty" and "May the Force be with you" have jumped off the screen to become part of our language by way of T-shirts, greeting cards, and children's games, reinforcing the power of science fiction over a generation poised on the edge of the twenty-first century. Using the long-running BBC. series "Dr. Who" (which celebrated its twentieth anniversary on the air last year) as a model, the Phoenix, Arizona—based company Scorpio International has put together Dr. Who in America, an hour-long exploration of the sociological and psychological reasons people love sci-fi.

Dr. Who, for those of you who have been in hyperspace for the last two decades, is a Time Lord from the planet Gallifrey who travels about through galaxies and centuries the way the rest of us navigate the freeways from our offices to our homes. The show has gained a sizable cult following in the United States since it began airing here in 1973. "Dr. Who" is currently being shown in fifty-eight countries with an estimated regular viewing audience of more than one hundred million. Scorpio's documentary focuses on American Whovians, fans who are attracted to the series' blend of horror, humor, adventure, and garish, comic-book surrealism.

"Dr. Who" "takes me away from drab, everyday life," says one fan. Another fan notes of sci-fi in general, "It keeps people from killing each other when they kill off aliens." A psychiatrist and three psychologists speculate that fear of science and fascination with science contribute equally to the genre's appeal, and that sci-fi bridges the social and technological gap between the present and the future. "We can test out strange waters with sci-fi and see how we'll feel in the future," says one. "The inundation of information today is overwhelming. Sci-fi is a vicarious mastery experience," says another.

Dr. Who in America has been picked up by both commercial and noncommercial stations across the country and is also available on videotape. Fans especially enjoy the extended interviews with Tom Baker, star of "Dr. Who" from 1974 to 1981, who is featured in most of the segments currently seen in the country. The home version of the documentary is available through Scorpio International, P.O. Box 11246, Phoenix, Arizona 85061-1246. The good Doctor himself would probably appreciate the fact that Dr. Who in America is narrated by former soap opera star Tom Carroll (David in "The Young and the Restless"), who got his start playing Bozo the Clown.