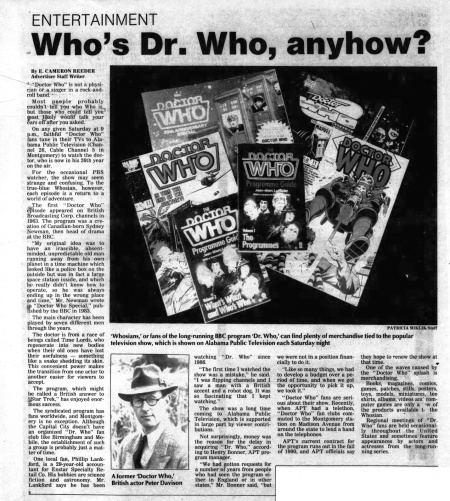 "Doctor Who" is not a physician or a singer in a rock-and-roll band:

Most people probably couldn't tell you who Who is, but those who could tell you most likely would talk your ears off after you asked.

On any given Saturday at 9 p.m., faithful "Doctor Who" fans tune in their TVs to Alabama Public Television (Channel 26, Cable Channel 5 in Montgomery) to watch the doctor, who is now in his 26th year on the air.

For the occasional PBS watcher, the show may seem strange and confusing. To the true-blue Whosian, however, each episode is a return to a world of adventure.

The first "Doctor Who" episode appeared on British Broadcasting Corp. channels in 1963. The program was a creation of Canadian-born Sydney Newman, then head of drama at the BBC.

"My original idea was to have an irascible, absentminded, unpredictable old man running away from his own planet in a time machine which looked like a police box on the outside but was in fact a large space station inside, and which he really didn't know how to operate, so he was always ending up in the wrong place and time," Mr. Newman wrote in "Doctor Who Special," published by the BBC in 1983.

The main character has been played by seven different men through the years.

The doctor is from a race of beings called Time Lords, who regenerate into new bodies when their old ones have lost their usefulness — something like a snake shedding its skin. This convenient power makes the transition from one actor to another easier for viewers to accept.

The program, which might be called a British answer to Star Trek," has enjoyed enormous success.

The syndicated program has fans worldwide, and Montgomery is no exception. Although the Capital City doesn't have an organized "Dr. Who" fan club like Birmingham and Mobile, the establishment of such a group is probably just a matter of time.

One local fan, Phillip Lankford, is a 29-year-old accountant for Enstar Specialty Retail Co. His hobbies are science fiction and astronomy. Mr. Lankford says he has been watching "Dr. Who" since 1986.

"The first time I watched the show was a mistake," he said. "I was flipping channels and I saw a man with a British accent and a robot dog. It was so fascinating that I kept watching."

The show was a long time coming to Alabama Public Television, which is supported in large part by viewer contributions.

Not surprisingly, money was the reason for the delay in acquiring "Dr. Who," according to Henry Bonner, APT program manager.

"We had gotton requests for a number of years from people who had seen the program either in England or in other States," Mr. Bonner said, "but we were not in a position financially to do it.

"Like so many things, we had to develop a budget over a period of time, and when we got the opportunity to pick it up, we took it."

"Doctor Who" fans are serious about their show. Recently, when APT had a telethon, "Doctor Who" fan clubs commuted to the Montgomery station on Madison Avenue from around the state to lend a hand on the telephones.

APT's current contract for the program runs out in the fall of 1990, and APT officials say they hope to renew the show at that time.

One of the waves caused by the "Doctor Who" splash is merchandising.

Regional meetings of "Dr. Who" fans are held occasionally throughout the United States and sometimes feature appearances by actors and actresses from the long-running series.

Caption: 'Whosians,' or fans of the long-running BBC program 'Dr. Who,' can find plenty of merchandise tied to the popular television show, which is shown on Alabama Public Television each Saturday night