Who's Sorry Now (The Mirror) 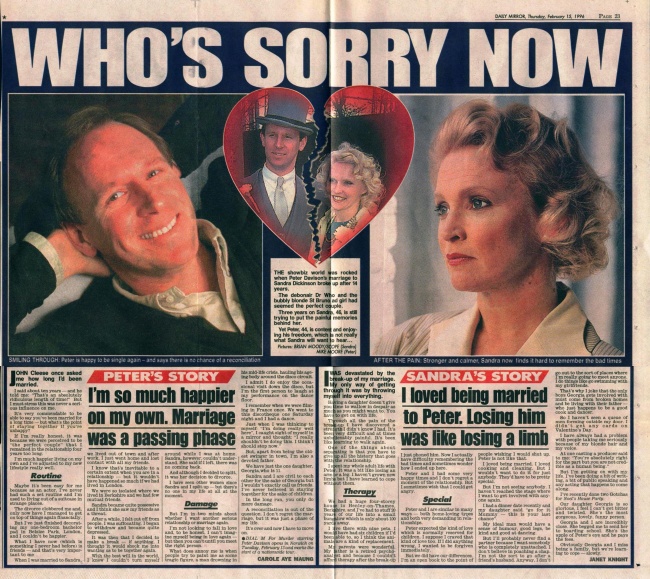 THE showbiz world was rocked when Peter Davison's marriage to Sandra Dickinson broke up after 14 years.

The debonair Dr Who and the bubbly blonde St Bruno ad girl had seemed the perfect couple.

Three years on Sandra. 46, is still trying to put the painful memories behind her.

Yet Peter, 44, is content and enjoying his freedom, which is not really what Sandra will want to hear...

SMILING THROUGH: Peter is happy to be single again - and says there is no chance of a reconciliation

AFTER THE PAIN: Stronger and calmer. Sandra now finds it hard to remember the bad times

JOHN Cleese once asked me how long I'd been married.

I said about ten years — and he told me: "That's an absolutely ridiculous length of time!" But I must stress this was never a serious influence on me.

It's very commendable to be able to say you've been married for a long time — but what's the point of staying together if you're unhappy?

If I'm really honest, it was because we were perceived to be "the perfect couple" that I remained in the relationship four years too long.

I'm much happier living on my own and I've adjusted to my new lifestyle really well.

Maybe it's been easy for me because as an actor. I've never had such a set routine and I'm used to living out of a suitcase in strange places.

The divorce clobbered me and, only now have I managed to get on top of things again financially.

But I've just finished decorating my one-bedroom bachelor pad in Belsize Park. London, and I couldn't be happier.

When I was married to Sandra, we lived out of town and after work, I just went home and lost contact with all my friends.

I know that's inevitable to a certain extent when you are in a relationship — but it wouldn't have happened so much if we had lived in London.

We were so isolated where we lived in Berkshire and we had few mutual friends.

Sandra became quite possessive and I think she saw my friends as a threat.

After a while, I felt cut off from people. I was suffocating. I began to withdraw and became quite depressed.

It was then that I decided to make a break — if anything. I thought it would shock me into wanting us to be together again.

With the best will in the world. I knew I couldn't turn myself around while I was at home. Sandra. however, couldn't, understand. She said if I left, there was no coming back.

And although I decided to split. it was her decision to divorce.

I have seen other women since Sandra and I split up - - but there's no one in my life at all at the moment.

But I'm in two minds about whether I want another serious relationship or marriage again.

I'm not looking to fall in love and, to be honest. I can't imagine myself being in love again -but then you can't until you meet the right person.

What does annoy me is when people try to paint me as some tragic figure, a man drowning in his mid-life crisis. hauling his ageing body around the disco circuit.

I admit I do enjoy the occasional visit down the disco, but I'm the first person to laugh at my performance on the dance floor.

I remember when we were filming in France once. We went to this discotheque one Saturday night and I had a dance.

Just when I was thinking to myself: "I'm doing really well here". I caught sight of myself in a mirror and thought: "I really shouldn't be doing this. I think I should stop now."

But, apart from being the oldest swinger in town, I'm also a devoted father.

We have just the one daughter. Georgia, who is 11.

In the long run, you only do more damage.

A reconciliation is out of the question. I don't regret the marriage, but it was just a phase of my life.

It's over and now I have to move on.

DIAL M For Murder starring Peter Davison opens in Norwich on Tuesday, February 13 and marks the start of a nationwide tour.

I WAS devastated by the break-up of my marriage. 114 only way of getting thrqugh it was by throwing my f into everything.

Having a daughter doesn't give you to wallow in despair as much as you might want to. You have to get on with life.

Through all the pain of the break-up I have discovered a strength I didn't know I had. It's very difficult and at times unbelievably painful. It's been like learning to walk again.

One of the things about separating is that you have to give up all the history that goes the relationship.

I spent my whole adult life with Peter. It was a bit like losing an a leg. I haven't grown new limbs but I have learned to cope without them.

We had a huge four-storey house in Henley-on-Thames, Berkshire, and I've had to stuff 20 year of our life into a small bungalow which is only about 100 yards away.

I live there with nine pets. I would have had six children if I'd been able to, so I think the animals are a kind of replacement.

My parents were wonderful. My father is a retired psychoanalyst and because I couldn't afford therapy after the break-up I just phoned him. Now I actually have difficulty remembering the bad times and sometimes wonder how I ended up here.

Peter and I had some very happy times and I don't regret a moment of the relationship. But I sometimes wish that I could get angry.

Peter and I are similar in many ways — both home-loving types and both very demanding in relationships.

Peter expected the kind of love which is normally reserved for children. I suppose I craved that kind of love too. If I did anything wrong, I wanted to be forgiven immediately.

But we did have our differences. I'm an open book to the point of people wishing I would shut up. Peter is not like that.

I loved being married. I loved cooking and cleaning. But I wouldn't want to do it for just anybody. They'd have to be pretty special.

But I'm not seeing anybody. I haven't reached the stage where I want to get involved with anyone again.

I had a dinner date recently and my daughter said "go for it Mummy — this is your last chance".

My ideal man would have a sense of humour. good legs. be kind and good at dancing.

But I'll probably never find a partner because I want somebody who is completely unattached. I don't believe in poaching a chap. I'm not the sort to go after a friend's husband. Anyway, I don't go out to the sort of places where I'm really going to meet anyone. I do things like go swimming with my girlfriends.

That's why I joke that the only boys Georgia gets involved with must come from broken homes and be living with their father — who just happens to be a good cook and dancer.

So I haven't seen a queue of men forming outside my door. I didn't get any cards on Valentine's Day.

I have always had a problem with people taking me seriously because of my blonde hair and my voice.

At one casting a producer said to me: "You're absolutely right for the part but you are not credible as a human being."

But I'm getting on with my life. I've been doing a bit of writing, a bit of public speaking and any acting that happens to come along.

Our daughter Georgia is so glorious, I feel I can't get bitter and twisted. She's the most gorgeous, lovely. funny person.

Georgia and I are incredibly close. She begged me to send her to boarding school. She's the apple of Peter's eye and he pays the fees.

Obviously Georgia and I miss being a family, but we're learning to cope — slowly.