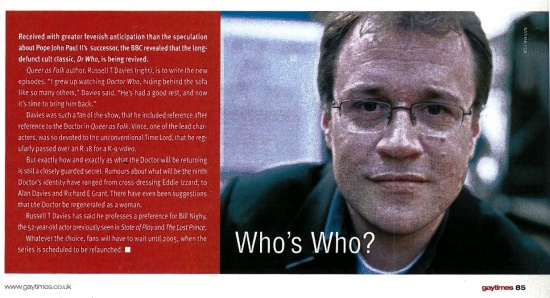 Received with greater feverish anticipation than the speculation about Pope John Paul II's successor, the BBC revealed that the long-defunct cult classic, Dr Who, is being revived.

Queer as Folk author, Russell T Davies (right), is to write the new episodes. "I grew up watching Doctor Who, hiding behind the sofa like so many others," Davies said. "He's had a good rest, and now it's time to bring him back."

Davies was such a fan of the show, that he included reference after reference to the Doctor in Queer as Folk. Vince, one of the lead characters, was so devoted to the unconventional Time Lord, that he regularly passed over an R-18 for a K-9 video.

But exactly how and exactly as what the Doctor will be returning is still a closely guarded secret. Rumours about what will be the ninth Doctor's identity have ranged from cross-dressing Eddie Izzard, to Alan Davies and Richard E Grant. There have even been suggestions that the Doctor be regenerated as a woman.

Russell T Davies has said he professes a preference for Bill Nighy, the 52-year-old actor previously seen in State of Play and The Lost Prince.

Whatever the choice, fans will have to wait until 2005, when the series is scheduled to be relaunched.