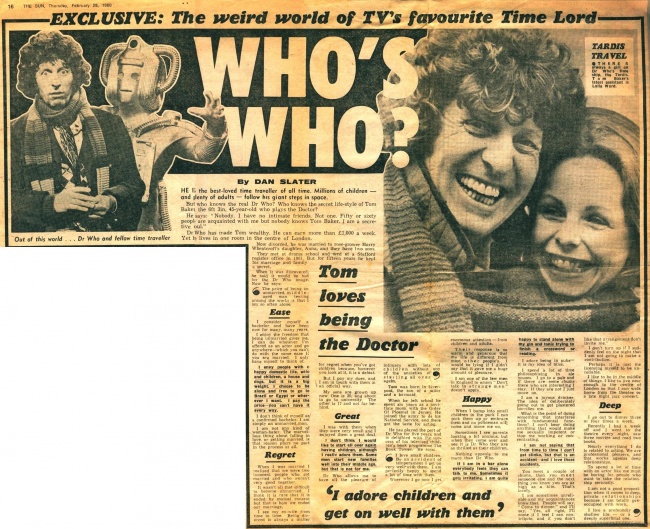 HE IS the best-loved time traveller of all time. Millions of children — and plenty of adults — follow his giant steps in space.

But who knows the real Dr Who? Who knows the secret life-style of Tom Baker, the 6ft 3in, 45-year-old who plays the Doctor?

He says: "Nobody. I have no intimate friends. Not one. Fifty or sixty people are acquainted with me but nobody knows Tom Baker. I am a secretive soul."

Dr Who has made Tom wealthy. He can earn more than £1,000 a week. Yet he lives in one room in the centre of London.

Now divorced, he was married to rose-grower Harry Wheatcroft's daughter, Anna, and they have two sons.

They met at drama school and wed at a Stafford register office in 1961. But for fifteen years he kept his marriage and family a secret.

When It was discovered. he said it would be bad for the Dr Who image. Now he says:

The price of being an unmarried, middle-aged man tearing around the world is that I am so often alone.

I consider myself a bachelor and have been now for many, many years.

I enjoy the freedom that being unmarried gives me. I can do whatever I'm offered as an actor and go anywhere—which you can't do with the same ease 1Z yoe are married. I on13 have myself to think of.

I envy people with a happy domestic life, wife and children, a house and dogs, but it is a big weight. I choose to be alone and free to go to Brazil or Egypt or wherever I want. I pay the price—you can't have it every way.

I don't think of myself as a confirmed bachelor. I am simply an unmarried-man.

I am not any kind of woman-hater. The marvellous thing about falling in love, or getting married. is that reason plays no part in the process at all.

When I was married I realised that we were two innocent people who got married and who weren't very good together.

It wasn't all that difficult to become unmarried. I think it is rare that it is ended by mutual consent but that is how we ended our marriage.

I see my ex-wife from time to time. Being divorced is always a matter for regret when you've got children because, however you look at it, it is a defeat.

But I pay my dues, and I am in touch with them in 1 an official way.

My sons are grown up now. One is 20, and about to go to university. The other is 17 and not far behind.

I was with them when they were very small and I enjoyed them a great deal.

I don't think I would like to start all over again having children, although I really adore them. Some men start new families well into their middle age, but that's not for me.

Dr Who allows me to have all the pleasure of intimacy with lots of children without any of the anxieties of oh stalling all over again.

Tom was born in Liverpool, the son of a sailor and a barmaid.

When he left school he spent six years as a novitiate monk with the Order Of Ploemel in Jersey. He joined the army to do his National Service. and there got the taste for acting.

He has played the part of Dr Who for five years. and is delighted with the success of his televised children's book programme The Book Tower. He says:

I love small children. By an accident of temperament I get on very well with them. I am perfectly happy to spend a lot of time with them.

Wherever I go now I get enormous attention — from children and adults.

Their response is so warm and generous that My life is different from most other people's. I would be lying If I didn't say that it gave me a huge amount of pleasure.

I am one of the few men in England to whom "Don't talk to strange men" doesn't apply.

When I bump Into small children in the park I can pick them up or embrace them and no policeman will come and move me on.

Sometimes I see parents looking a bit anxious, but when they come over and see it is Dr Who they are as thrilled as their children.

Nothing appeals to me more than Dr Who.

If I am in a bar alone everybody feels they can talk to me. Sometimes it gets irritating. I am quite happy to stand alone with my gin and tonic trying to finish a crossword or reading.

I adore being in pubs-it is my idea of bliss.

I spend a lot of time philosophizing in ale houses. I go to a pub and if there are some chums there who are interesting I stay. If they are not I just move on.

I am a joyous drinker. The idea of deliberately going out to get plastered horrifies me.

What is the point of doing something that interferes with fundamental functions? I can't bear doing anything that would make me sexually impotent or stop me working or concentrating.

I am not saying that from time to time I don't get stinko but that is an accident—and I love those accidents.

You meet a couple of chums, then you meet someone else and the next thing you know you are as high as a kite. That's lovely.

I am sometimes unreliable and my acquaintances know that. People will say, "Come to dinner." and I'll say. "Yes, all right, I'll come if I feel I can contribute, and if you don't like that arrangement-don't invite me."

I don't turn up if I suddenly feel on the night that I am not going to make a contribution.

Perhaps it is just me licensing myself to be unreliable.

I like to be in the middle of things. I like to live near enough to the centre of London so that 1 can walk home from the theatre or a late night jazz concert.

I go out to dinner three or four times a week.

Recently I had a week off and I went to the theatre every' night, saw three movies and read two books.

Nearly everything I do is related to acting. We are professional pleasers, and that works against deep relationships.

To spend a lot of time with an actor like me must be boring for people who want to take the relationship seriously.

I am not a good proposition when it comes to deep. private relationships because I am totally preoccupied with work,

I live a profoundly shallow life — or a deeply superficial one.

Caption: Out of this world ... Dr Who and fellow time traveller