Who's Who in Tardis set? 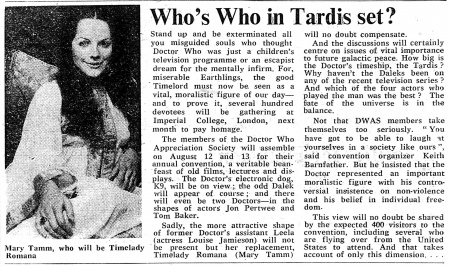 Stand up and be exterminated all you misguided souls who thought Doctor Who was just a children's television programme or an escapist dream for the mentally infirm. For, miserable Earthlings, the good Timelord must now be. seen as a vital, moralistic figure of our day—and to prove it, several hundred devotees will be gathering at Imperial College, London, next month to pay homage.

The members of the Doctor Who Appreciation Society will assemble on August 12 and 13 for their annual convention, a veritable beanfeast of old films, lectures and displays. The Doctor's electronic dog, K9, will be on view; the odd Dalek will appear of course ; and there will even be two Doctors—in the shapes of actors Jon Pertwee and Tom Baker.

Sadly, the more attractive shape of former Doctor's assistant Leela (actress Louise Jamieson) will not be present but her replacement, Timelady Romana (Mary Tamm) will no doubt compensate.

And the discussions will certainly centre on issues of-vital importance to future galactic peace. How big is the Doctor's timeship, the Tardis? Why 'haven't the Daleks been on any of the recent television series ? And which of the four actors who played the man was the best ? The fate of the universe is in the balance.

Not that DWAS members take themselves too seriously." You have got to be able to laugh at yourselves in a society like ours", said convention organizer Keith Barnfather. But he insisted that the Doctor represented an important moralistic figure with his controversial insistence on non-violence and his belief in individual freedom.

This view will no doubt be shared by the expected 400 visitors to the convention, including several who are. flying over from the United States to attend. And that takes account of only this dimension....

Caption: Mary Tamm, who will be Timelady Romana