Who's Who in outer space 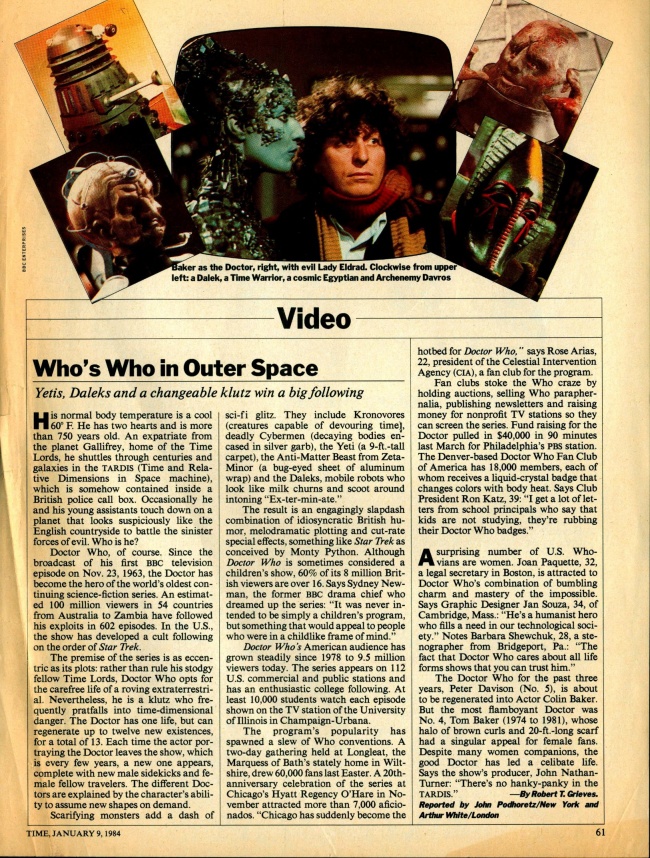 Caption: Baker as the Doctor, right, with evil Lady Eldred. Clockwise from upper left: a Dalek, a Time Warrior, a cosmic Egyptian and Archenemy Davros

Who's Who in Outer Space

Yetis, Daleks and a changeable klutz win a big following

His normal body temperature is a cool 60° F. He has two hearts and is more than 750 years old. An expatriate from the planet Gallifrey, home of the Time Lords, he shuttles through centuries and galaxies in the TARDIS (Time and Relative Dimensions in Space machine), which is somehow contained inside a British police call box. Occasionally he and his young assistants touch down on a planet that looks suspiciously like the English countryside to battle the sinister forces of evil. Who is he?

Doctor Who, of course. Since the broadcast of his first BBC television episode on Nov. 23, 1963, the Doctor has become the hero of the world's oldest continuing science-fiction series. An estimated 100 million viewers in 54 countries from Australia to Zambia have followed his exploits in 602 episodes. In the U.S., the show has developed a cult following on the order of Star Trek.

The premise of the series is as eccentric as its plots: rather than rule his stodgy fellow Time Lords, Doctor Who opts for the carefree life of a roving extraterrestrial. Nevertheless, he is a klutz who frequently pratfalls into time-dimensional danger. The Doctor has one life, but can regenerate up to twelve new existences, for a total of 13. Each time the actor portraying the Doctor leaves the show, which is every few years, a new one appears, complete with new male sidekicks and female fellow travelers. The different Doctors are explained by the character's ability to assume new shapes on demand.

Scarifying monsters add a dash of sci-fi glitz. They include Kronovores (creatures capable of devouring time), deadly Cybermen (decaying bodies encased in silver garb), the Yeti (a 9-ft.-tall carpet), the Anti-Matter Beast from Zeta-Minor (a bug-eyed sheet of aluminum wrap) and the Daleks, mobile robots who look like milk churns and scoot around intoning "Ex-ter-min-ate."

The result is an engagingly slapdash combination of idiosyncratic British humor, melodramatic plotting and cut-rate special effects, something like Star Trek as conceived by Monty Python. Although Doctor Who is sometimes considered a children's show, 60% of its 8 million British viewers are over 16. Says Sydney Newman, the former BBC drama chief who dreamed up the series: "It was never intended to be simply a children's program, but something that would appeal to people who were in a childlike frame of mind."

Doctor Who's American audience has grown steadily since 1978 to 9.5 million viewers today. The series appears on 112 U.S. commercial and public stations and has an enthusiastic college following. At least 10,000 students watch each episode shown on the TV station of the University of Illinois in Champaign-Urbana.

The program's popularity has spawned a slew of Who conventions. A two-day gathering held at Longleat. the Marquess of Bath's stately home in Wiltshire, drew 60,000 fans last Easter. A 20th-anniversary celebration of the series at Chicago's Hyatt Regency O'Hare in November attracted more than 7,000 aficionados. "Chicago has suddenly become the hotbed for Doctor Who," says Rose Arias, 22, president of the Celestial Intervention Agency (CIA), a fan club for the program.

Fan clubs stoke the Who craze by holding auctions, selling Who paraphernalia, publishing newsletters and raising money for nonprofit TV stations so they can screen the series. Fund raising for the Doctor pulled in $40,000 in 90 minutes last March for Philadelphia's PBS station. The Denver-based Doctor Who Fan Club of America has 18,000 members, each of whom receives a liquid-crystal badge that changes colors with body heat. Says Club President Ron Katz, 39: "I get a lot of letters from school principals who say that kids are not studying, they're rubbing their Doctor Who badges."

A surprising number of U.S. Whovians are women. Joan Paquette, 32, a legal secretary in Boston, is attracted to Doctor Who's combination of bumbling charm and mastery of the impossible. Says Graphic Designer Jan Souza, 34, of Cambridge, Mass.: "He's a humanist hero who fills a need in our technological society." Notes Barbara Shewchuk, 28, a stenographer from Bridgeport, Pa.: "The fact that Doctor Who cares about all life forms shows that you can trust him."

The Doctor Who for the past three years, Peter Davison (No. 5), is about to be regenerated into Actor Colin Baker. But the most flamboyant Doctor was No. 4, Tom Baker (1974 to 1981), whose halo of brown curls and 20-ft.-long scarf had a singular appeal for female fans. Despite many women companions, the good Doctor has led a celibate life. Says the show's producer, John Nathan-Turner: "There's no hanky-panky in the TARDIS."