Who's a Good K-Nine Then! 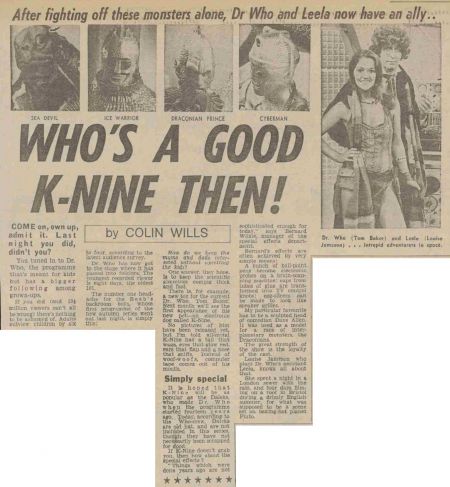 After fighting off these monsters alone, Dr Who and Leek now have an ally..

COME on, own up, admit it. Last night you did, didn't you?

You tuned In to Dr. Who, the programme that's meant for kids but has a bigger following among grown-ups,

If you did (and 13 1/2 million viewers can't all be wrong) there's nothing to be ashamed of. Adults outview children by six to four, according to the latest audience survey.

Dr. Who has now got to the stage where It has named into folklore. The youngest recorded viewer is eight days, the oldest 101.

The number one headache for the Beeb's backroom boys, whose first programme of the new autumn series went out last night. is simply this:

How do we keep the mums and dads interested without upsetting the kids?

One answer, they hope, is to keep the scientific gimmicks coming thick and fast.

There is, for example, a new toy for the current Dr. Who. Tom Baker. Next month we'll see the first appearance of his new pet—an electronic dog called K-Nine.

No pictures of him have been released yet, but I'm told all-metal K-Nine has a tail that wags, eyes that glow red, ears that flap and a nose that sniffs. Instead of woof-woofs, computer tape comes out of his mouth.

It is hoped that K-Nine will be as popular as the Daleks, who mode Dr. Who when the programme started fourteen years ago. Today, according to the Who-crew, Daleks are old hat, and are not included in this series, though they have not necessarily been scrapped for good.

If K-Nine doesn't grab you, then how about, the speciaal effects ?

"Things which were done years ago are not sophisticated enough for today," says Bernard Wilkie, manager of the special effects department.

A bunch of ball-point pens become electronic probes on a brain-scanning machine, caps from tubes of glue are transformed into TV control knobs; egg-slicers can be made to look like speaker grilles.

My particular favourite has to be a sculpted head of comedian Dave Allen. It was used as a model for a race of Interplanetary monsters, the Draconians.

The great strength Of the show is the loyalty of the cast.

Louise Jameson who plays Dr. Who's assistant Leela, knows all about that.

She spent a night in a London sewer with the rats, and four days filming a roof In Bristol during a drizzly English summer, for what was supposed to be a scene set on baking-hot planet Pluto.