Who's coming to prime time 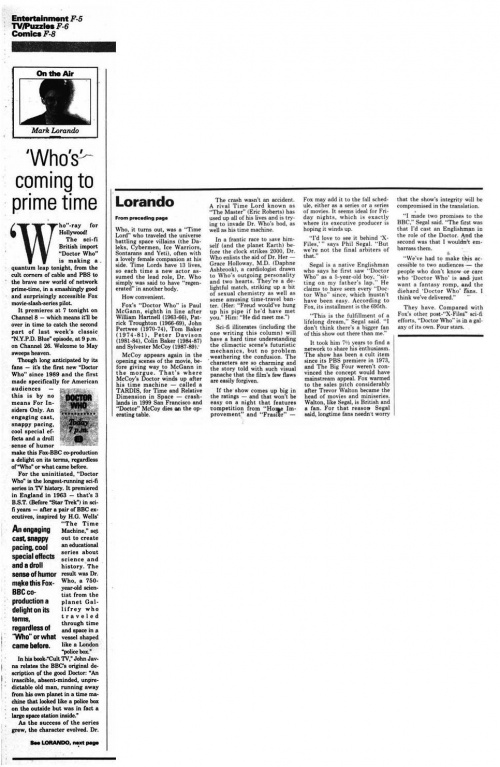 The sci-fi British import "Doctor Who" is making a quantum leap tonight, from the cult corners of cable and PBS to the brave new world of network prime-time, in a smashingly good and surprisingly accessible Fox movie-slash-series pilot.

It premieres at 7 tonight on Channel 8 - which means it'll be over in time to catch the second part of last week's classic "N.Y.P.D. Blue" episode, at 9 p.m. on Channel 26. Welcome to May sweeps heaven.

Though long anticipated by its fans - it's the first new "Doctor Who" since 1989 and the first made specifically for American audiences - this is by no means For Insiders Only. An engaging cast, snappy pacing, cool special effects and a droll sense of humor make this Fox-BBC co-production a delight on its terms, regardless of "Who" or what came before.

For the uninitiated, "Doctor Who" is the longest-running sci-fi series in TV history. It premiered in England in 1963 - that's 3 B.S.T. (Before "Star Trek") in sci-fi years - after a pair of BBC executives, inspired by H.G. Wells' "The Time Machine," set out to create an educational series about science and history. The result was Dr. Who, a 750-year-old scientist from the planet Gallifrey who traveled through time and space in a vessel shaped like a London "police box."

In his book "Cult TV," John Javna relates the BBC's original description of the good Doctor: "An irascible, absent-minded, unpredictable old man, running away from his own planet in a time machine that looked like a police box on the outside but was in fact a large space station inside."

As the success of the series grew, the character evolved. Dr. Who, it turns out, was a "Time Lord" who traveled the universe battling space villains (the Daleks, Cybermen, Ice Warriors, Sontarans and Yeti), often with a lovely female companion at his side. Time Lords have 13 lives, so each time a new actor assumed the lead role, Dr. Who simply was said to have "regenerated" in another body.

McCoy appears again in the opening scenes of the movie, before giving way to McGann in the morgue. That's where McCoy's Doctor winds up after his time machine - called a TARDIS, for Time and Relative Dimension in Space - crash-lands in 1999 San Francisco and "Doctor" McCoy dies on the operating table.

The crash wasn't an accident. A rival Time Lord known as "The Master" (Eric Roberts) has used up all of his lives and is trying to invade Dr. Who's bod, as well as his time machine.

In a frantic race to save himself (and the planet Earth) before the clock strikes 2000, Dr. Who enlists the aid of Dr. Her - Grace Holloway, M.D. (Daphne Ashbrook), a cardiologist drawn to Who's outgoing personality and two hearts. They're a delightful match, striking up a bit of sexual chemistry as well as some amusing time-travel banter. (Her: "Freud would've hung up his pipe if he'd have met you." Him: "He did meet me.")

Sci-fi illiterates (including the one writing this column) will have a hard time understanding the climactic scene's futuristic mechanics, but no problem weathering the confusion. The characters are so charming and the story told with such visual panache that the film's few flaws are easily forgiven.

If the show comes up big in the ratings - and that won't be easy on a night that features competition from "Home Improvement" and "Frasier" - Fox may add it to the fall schedule, either as a series or a series of movies. It seems ideal for Friday nights, which is exactly where its executive producer is hoping it winds up.

"I'd love to see it behind 'X-Files,' " says Phil Segal. "But we're not the final arbiters of that."

Segal is a native Englishman who says he first saw "Doctor Who" as a 5-year-old boy, "sitting on my father's lap." He claims to have seen every "Doctor Who" since, which mustn't have been easy. According to Fox, its installment is the 695th.

"This is the fulfillment of a lifelong dream," Segal said. "I don't think there's a bigger fan of this show out there than me."

It took him 7 1/2 years to find a network to share his enthusiasm. The show has been a cult item since its PBS premiere in 1973, and The Big Four weren't convinced the concept would have mainstream appeal. Fox warmed to the sales pitch considerably after Trevor Walton became the head of movies and miniseries. Walton, like Segal, is British and a fan. For that reason, Segal said, longtime fans needn't worry that the show's integrity will be compromised in the translation.

"I made two promises to the BBC," Segal said. "The first was that I'd cast an Englishman in the role of the Doctor. And the second was that I wouldn't embarrass them.

"We've had to make this accessible to two audiences - the people who don't know or care who 'Doctor Who' is and just want a fantasy romp, and the diehard 'Doctor Who' fans. I think we've delivered."

They have. Compared with Fox's other post-"X-Files" sci-fi efforts, "Doctor Who" is in a galaxy of its own. Four stars.