Who's lost his way? 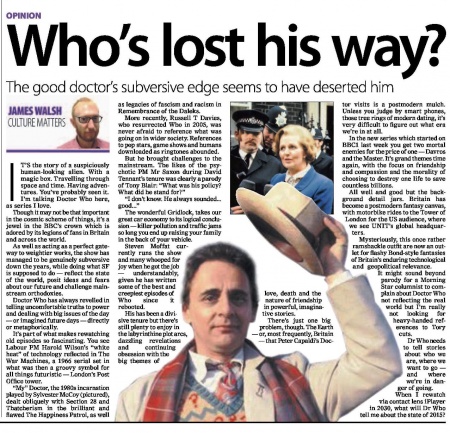 The good doctor's subversive edge seems to have deserted him

IT'S the story of a suspiciously human-looking alien. With a magic box. Travelling through space and time. Having adventures. You've probably seen it. I'm talking Doctor Who here, as series I love.

Though it may not be that important in the cosmic scheme of things, it's a jewel in the BBC's crown which is adored by its legions of fans in Britain and across the world.

As well as acting as a perfect gateway to weightier works, the show has managed to be genuinely subversive down the years, while doing what SF is supposed to do — reflect the state of the world, posit ideas and fears about our future and challenge mainstream orthodoxies.

Doctor Who has always revelled in telling uncomfortable truths to power and dealing with big issues of the day — or imagined future days — directly or metaphorically.

It's part of what makes rewatching old episodes so fascinating. You see Labour PM Harold Wilson's "white heat" of technology reflected in The War Machines, a 1966 serial set in what was then a groovy symbol for all things futuristic — London's Post Office tower.

"My" Doctor, the 1980s incarnation played by Sylvester McCoy (pictured), dealt obliquely with Section 28 and Thatcherism in the brilliant and flawed The Happiness Patrol, as well as legacies of fascism and racism in Remembrance of the Daleks.

More recently, Russell T Davies, who resurrected Who in 2005, was never afraid to reference what was going on in wider society. References to pop stars, game shows and humans downloaded as ringtones abounded.

But he brought challenges to the mainstream. The likes of the psychotic PM Mr Saxon during David Tennant's tenure was clearly a parody of Tony Blair: "What was his policy? What did he stand for?"

The wonderful Gridlock, takes our great car economy to its logical conclusion — killer pollution and traffic jams so long you end up raising your family in the back of your vehicle.

Steven Moffat currently runs the show and many whooped for joy when he got the job — understandably, given he has written some of the best and creepiest episodes of Who since it rebooted.

His has been a divisive tenure but there's still plenty to enjoy in the labyrinthine plot arcs, dazzling revelations and continuing obsession with the big themes of love, death and the nature of friendship in powerful, imaginative stories.

There's just one big problem, though. The Earth or, most frequently, Britain —that Peter Capaldi's Doctor visits is a postmodern mulch. Unless you judge by smart phones, those tree rings of modern dating, it's very difficult to figure out what era we're in at all.

In the new series which started on BBC1 last week you get two mortal enemies for the price of one — Davros and the Master. It's grand themes time again, with the focus on friendship and compassion and the morality of choosing to destroy one life to save countless billions.

All well and good but the background detail jars. Britain has become a postmodern fantasy canvas, with motorbike rides to the Tower of London for the US audience, where we see UNIT's global headquarters.

Mysteriously, this once rather ramshackle outfit are now an outlet for flashy Bond-style fantasies of Britain's enduring technological and geopolitical relevance.

It might sound beyond parody for a Morning Star columnist to complain about Doctor Who not reflecting the real world but I'm really not looking for heavy-handed references to Tory cuts.

Dr Who needs to tell stories about who we are, where we want to go — and where we're in danger of going.

When I rewatch via contact lens iPlayer in 2030, what will Dr Who tell me about the state of 2015?