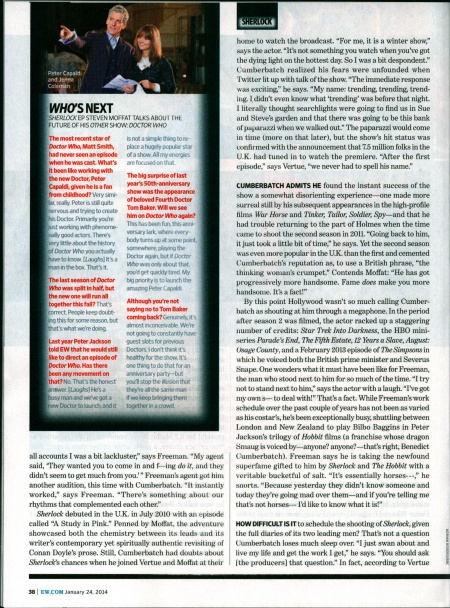 SHERLOCK EP STEVEN MOFFAT TALKS ABOUT THE FUTURE OF HIS OTHER SHOW: DOCTOR WHO

The most recent star of Doctor Who, Matt Smith, had never seen an episode when he was cast. What's it been like working with the new Doctor, Peter Capaldi, given he is a fan from childhood?

Very similar, really. Peter is still quite nervous and trying to create his Doctor. Primarily you're just working with phenomenally good actors. There's very little about the history of Doctor Who you actually have to know. [Laughs] It's a man in the box. That's it.

The last season of Doctor Who was split in half, but the new one will run all together this fall?

That's correct. People keep doubting this for some reason, but that's what we're doing.

Last year Peter Jackson told EW that he would still like to direct an episode of Doctor Who. Has there been any movement on that?

No. That's the honest answer. [Laughs] He's a busy man and we've got a new Doctor to launch, and it is not a simple thing to replace a hugely popular star of a show. All my energies are focused on that.

The big surprise of last year's 50th-anniversary show was the appearance of beloved Fourth Doctor Tom Baker. Will we see him on Doctor Who again?

This has been fun, this anniversary lark, where everybody turns up at some point, somewhere, playing the Doctor again, but if Doctor Who was only about that, you'd get quickly tired. My big priority is to launch the amazing Peter Capaldi.

Although you're not saying no to Tom Baker coming back?

Genuinely, it's almost inconceivable. We're not going to constantly have guest slots for previous Doctors. I don't think it's healthy for the show. It's one thing to do that for an anniversary party—but you'll stop the illusion that they're all the same man if we keep bringing them together in a crowd.