Who's next - is it time for a Time Lady? 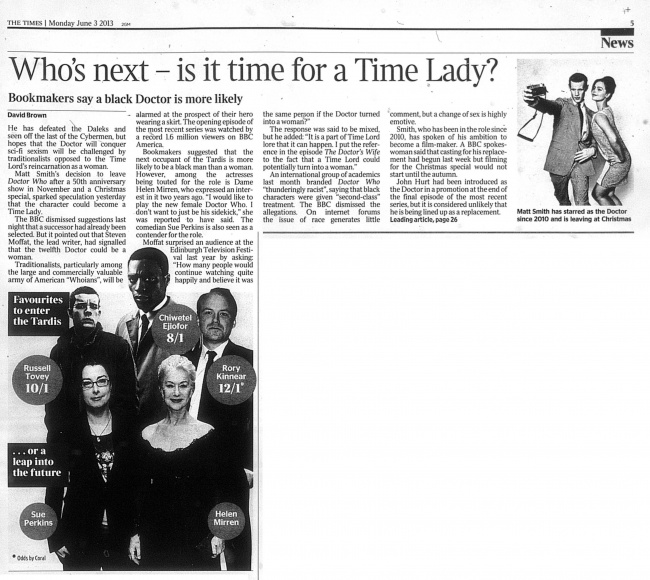 He has defeated the Daleks and seen off the last of the Cybermen, but hopes that the Doctor will conquer sci-fi sexism will be challenged by traditionalists opposed to the Time Lord's reincarnation as a woman.

Matt Smith's decision to leave Doctor Who after a 50th anniversary show in November and a Christmas special, sparked speculation yesterday that the character could become a Time Lady.

The BBC dismissed suggestions last night that a successor had already been selected. But it pointed out that Steven Moffat, the lead writer, had signalled that the twelfth Doctor could be a woman.

Traditionalists, particularly among the large and commercially valuable army of American "Whoians", will be - alarmed at the prospect of their hero wearing a skirt. The opening episode of the most recent series was watched by a record 1.6 million viewers on BBC America.

Bookmakers suggested that the next occupant of the Tardis is more likely to be a black man than a woman. However, among the actresses being touted for the role is Dame Helen Mirren, who expressed an interest in it two years ago. "I would like to play the new female Doctor Who. I don't want to just be his sidekick," she was reported to have said. The comedian Sue Perkins is also seen as a contender for the role.

Moffat surprised an audience at the Edinburgh Television Festival last year by asking: "How many people would continue watching quite happily and believe it was the same person if the Doctor turned into a woman?"

The response was said to be mixed, but he added: "It is a part of Time Lord lore that it can happen. I put the reference in the episode The Doctor's Wife to the fact that a Time Lord could potentially turn into a woman."

An international group of academics last month branded Doctor Who "thunderingly racist", saying that black characters were given "second-class" treatment. The BBC dismissed the allegations. On internet forums the issue of race generates little comment, but a change of sex is highly emotive.

Smith, who has been in the role since 2010, has spoken of his ambition to become a film-maker. A BBC spokeswoman said that casting for his replacement had begun last week but filming for the Christmas special would not start until the autumn.

John Hurt had been introduced as the Doctor in a promotion at the end of the final episode of the most recent series, but it is considered unlikely that he is being lined up as a replacement. Leading article, page 26

Favourites to enter the Tardis ... or a leap into the future

Caption: Matt Smith has starred as the Doctor since 2010 and is leaving at Christmas