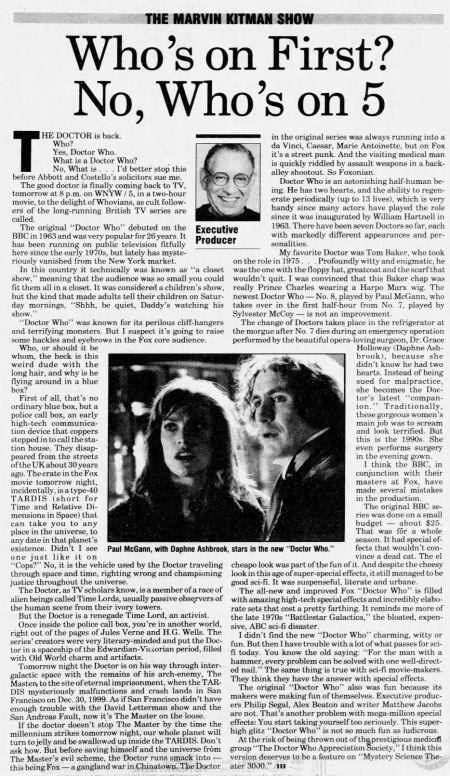 THE DOCTOR is back. Who? Yes, Doctor Who. What is a Doctor Who? No, What is ... I'd better stop this before Abbott and Costello's solicitors sue me.

The good doctor is finally coming back to TV, tomorrow at 8 p.m. on WNYW / 5, in a two-hour movie, to the delight of Whovians, as cult followers of the long-running British TV series are called.

The original "Doctor Who" debuted on the BBC in 1963 and was very popular for 26 years. It has been running on public television fitfully here since the early 1970s, but lately has mysteriously vanished from the New York market.

In this country it technically was known as "a closet show," meaning that the audience was so small you could fit them all in a closet. It was considered a children's show, but the kind that made adults tell their children on Saturday mornings, "Shhh, be quiet, Daddy's watching his show."

"Doctor Who" was known for its perilous cliff-hangers and terrifying monsters. But I suspect it's going to raise some hackles and eyebrows in the Fox core audience.

Who, or should it be whom, the heck is this weird dude with the long hair, and why is he flying around in a blue box?

First of all, that's no ordinary blue box, but a police call box, an early high-tech communication device that coppers stepped in to call the station house. They disappeared from the streets of the UK about 30 years ago. The crate in the Fox movie tomorrow night, incidentally, is a typo 40 TARDIS (short for Time and Relative Dimensions in Space) that can take you to any place in the universe, to any date in that planet's existence. Didn't I see one just like it on "Cops?" No, it is the vehicle used by the Doctor traveling through space and time, righting wrong and championing justice throughout the universe.

The Doctor, as TV scholars know, is a member of a race of alien beings called Time Lords, usually passive observers of the human scene from their ivory towers.

But the Doctor is a renegade Time Lord, an activist.

Once inside the police call box, you're in another world, right out of the pages of Jules Verne and H.G. Wells. The series' creators were very literary-minded and put the Doctor in a spaceship of the Edwardian-Victorian period, filled with Old World charm and artifacts.

Tomorrow night the Doctor is on his way through intergalactic space with the remains of his arch-enemy, The Master" to the site of eternal imprisonment, when the TARDIS mysteriously malfunctions and crash lands in San Francisco on Dec. 30, 1999. As if San Francisco didn't have enough trouble with the David Letterman show and the San Andreas Fault, now it's The Master on the loose.

If the doctor doesn't stop The Master by the time the millennium strikes tomorrow night, our whole planet will turn to jelly and be swallowed up inside the TARDIS. Don't ask how. But before saving himself and the universe from The Master's evil scheme, the Doctor runs smack into — this being Fox — a gangland war in Chinatown. The Doctor in the original series was always running into a da Vinci, Caesar, Marie Antoinette, but on Fox it's a street punk. And the visiting medical man is quickly riddled by assault weapons in a back-alley shootout. So Foxonian.

Doctor Who is an astonishing half-human being. He has two hearts, and the ability to regenerate periodically (up to 13 lives), which is very handy since many actors have played the role since it was inaugurated by William Hartnell in 1963. There have been seven Doctors so far, each with markedly different appearances and personalities.

My favorite Doctor was Tom Baker, who took on the role in 1975... Profoundly witty and enigmatic, he was the one with the floppy hat, greatcoat and the scarf that wouldn't quit. I was convinced that this Baker chap was really Prince Charles wearing a Harpo Marx wig. The newest Doctor Who — No. 8, played by Paul McGann, who takes over in the first half-hour from No. 7, played by Sylvester McCoy — is not an improvement.

The change of Doctors takes place in the refrigerator at the morgue after No. 7 dies during an emergency operation performed by the beautiful opera-loving surgeon, Dr. Grace Holloway (Daphne Ash-brook), because she didn't know he had two hearts. Instead of being sued for malpractice, she becomes the Doctor's latest "companion." Traditionally, these gorgeous women's main job was to scream and look terrified. But this is the 1990s. She even performs surgery in the evening gown.

I think the BBC, in conjunction with their masters at Fox, have made several mistakes in the production.

The original BBC series was done on a small budget — about $25. That was for a whole season. It had special effects that wouldn't convince a dead cat. The el cheapo look was part of the fun of it. And despite the cheesy look in this age of super-special effects, it still managed to be good sci-fi. It was suspenseful, literate and urbane.

The all-new and improved Fox "Doctor Who" is filled with amazing high-tech special effects and incredibly elaborate sets that cost a pretty farthing. It reminds me more of the late 1970s "Battlestar Galactica," the bloated, expensive, ABC sci-fi disaster.

I didn't find the new "Doctor Who" charming, witty or fun. But then I have trouble with a lot of what passes for sci-fi today. You know the old saying: "For the man with a hammer, every problem can be solved with one well-directed nail." The same thing is true with sci-fi movie-makers They think they have the answer with special effects.

The original "Doctor Who" also was fun because its makers were making fun of themselves. Executive producers Philip Segal, Alex Beaton and writer Matthew Jacobs are not. That's another problem with mega-million special effects! You start taking yourself too seriously. This super-high glitz "Doctor Who" is not so much fun as ludicrous.

At the risk of being thrown out of the prestigious medial group "The Doctor Who Appreciation Society," I think this version deserves to be a feature on "Mystery Science Theater 3000."

Caption: Paul McGann, with Daphne Ashbrook stars in the new "Doctor Who."