Who's quit? Call the Doc 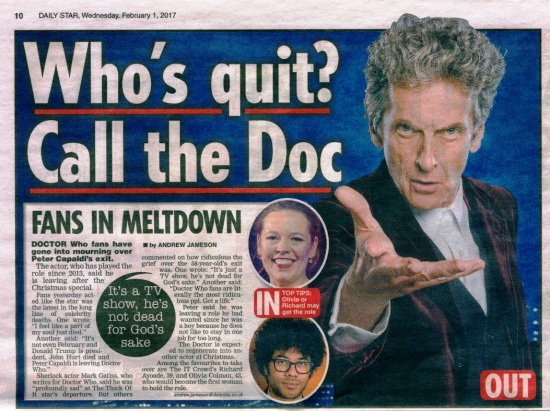 DOCTOR Who fans have gone into mourning over Peter Capaldi's exit. The actor, who has played the role since 2013, said he is leaving after the Christmas special. Fans yesterday acted like the star was the latest in the long line of celebrity deaths. One wrote: "I feel like a part of my soul just died." Another said: "It's not even February and Donald Trump is president, John Hurt died and Peter Capaldi is leaving Doctor Who."

Sherlock actor Mark Gatiss, who writes for Doctor Who, said he was "profoundly sad" at The Thick Of It star's departure. But others commented on how ridiculous the grief over the 58-year-old's exit was. One wrote: "It's just a TV show, he's not dead for God's sake." Another said: "Doctor Who fans are literally the most ridiculous ppl. Get a life." Peter said he was leaving a role he had wanted since he was a boy because he does not like to stay in one job for too long.

The Doctor is expected to regenerate into another actor at Christmas. Among the favourites to take over are The IT Crowd's Richard Ayoade, 39, and Olivia Colman, 43, who would become the first woman to hold the role.

Caption: TOP TIPS: Olivia or Richard may get the role