Who's right, Who's wrong on new Who? 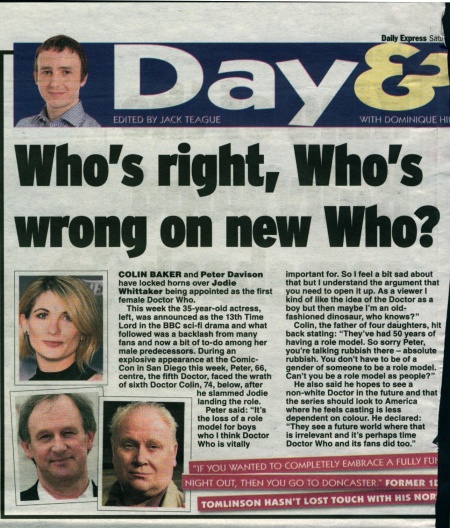 COLIN BAKER and Peter Davison have locked horns over Jodie Whittaker being appointed as the first female Doctor Who.

This week the 35-year-old actress, left, was announced as the 13th Time Lord in the BBC sci-fi drama and what followed was a backlash from many fans and now a bit of to-do among her male predecessors. During an explosive appearance at the Comic-Con in San Diego this week, Peter, 66, centre, the fifth Doctor, faced the wrath of sixth Doctor Colin, 74, below, after he slammed Jodie landing the role. Peter said: "It's the loss of a role model for boys who I think Doctor Who is vitally important for. So I feel a bit sad about that but I understand the argument that you need to open it up. As a viewer I kind of like the idea of the Doctor as a boy but then maybe I'm an old-fashioned dinosaur, who knows?"

Colin, the father of four daughters, hit back stating: "They've had 50 years of having a role model. So sorry Peter, you're talking rubbish there — absolute rubbish. You don't have to be of a gender of someone to be a role model. Can't you be a role model as people?"

He also said he hopes to see a non-white Doctor in the future and that the series should look to America where he feels casting is less dependent on colour. He declared: "They see a future world where that is irrelevant and it's perhaps time Doctor Who and its fans did too."