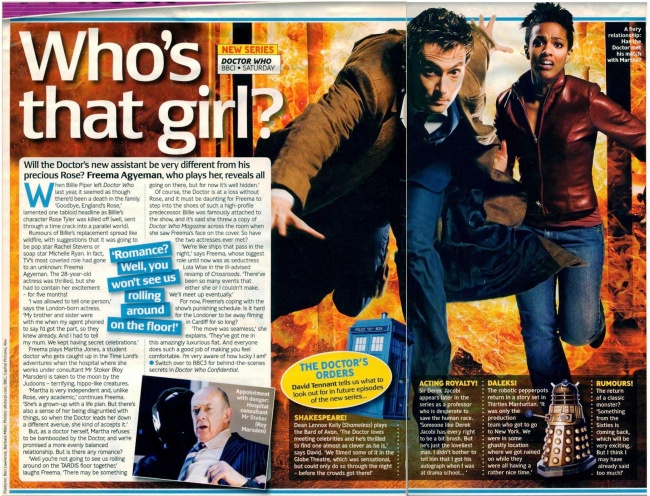 Will the Doctor's new assistant be very different from his precious Rose? Freema Agyeman, who plays her, reveals all

When Billie Piper left Doctor Who last year, it seemed as though there'd been a death In the family. 'Goodbye, England's Rose,' lamented one tabloid headline as Billie's character Rose Tyler was killed off (well, sent through a time crack into a parallel world).

Rumours of Billie's replacement spread like wildfire, with suggestions that it was going to be pop star Rachel Stevens or soap star Michelle Ryan. In fact, TV's most coveted role had gone to an unknown: Freema Agyeman. The 28-year-old actress was thrilled, but she had to contain her excitement - for five months!

'I was allowed to tell one person,' says the London-born actress. 'My brother and sister were with me when my agent phoned to say I'd got the part, so they knew already. And I had to tell my mum. We kept having secret celebrations.'

Freema plays Martha Jones, a student doctor who gets caught up in the Time Lord's adventures when the hospital where she works under consultant Mr Stoker (Roy Marsden) is taken to the moon by the Judoons - terrifying, hippo-like creatures.

'Martha is very Independent and, unlike Rose, very academic,' continues Freema. 'She's a grown-up with a life plan. But there's also a sense of her being disgruntled with things, so when the Doctor leads her down a different avenue, she kind of accepts it.'

But, as a doctor herself, Martha refuses to be bamboozled by the Doctor, and we're promised a more evenly balanced relationship. But is there any romance?

'Well you're not going to see us rolling around on the TARDIS floor together,' laughs Freema. 'There may be something going on there, but for now it's well hidden.'

Of course, the Doctor Is at a loss without Rose, and it must be daunting for Freema to step into the shoes of such a high-profile predecessor. Billie was famously attached to the show, and It's said she threw a copy of Doctor Who Magazine across the room when she saw Freema's face on the cover. So have the two actresses ever met?

"We're like ships that pass in the night,' says Freema, whose biggest role until now was as seductress Lola Wise in the ill-advised revamp of Crossroads. 'There've been so many events that either she or I couldn't make. We'll meet up eventually.'

For now, Freema's coping with the show's punishing schedule. Is it hard for the Londoner to be away filming in Cardiff for so long?

'The move was seamless,' she explains. They've got me in this amazingly luxurious flat. And everyone does such a good Job of making you feel comfortable. I'm very aware of how lucky I am!'

•Switch over to BBC3 for behind-the-scenes secrets In Doctor Who Confidential.

Caption: A fiery relationship: Has the Doctor met his match with Martha?

David Tennant tells us what to look out for in future episodes of the new series...

SHAKESPEARE! Dean Lennox Kelly (Shameless) plays the Bard of Avon. 'The Doctor loves meeting celebrities and he's thrilled to find one almost as clever as he is,' says David. 'We filmed some of it in the Globe Theatre, which was sensational, but could only do so through the night - before the crowds got there!'

ACTING ROYALTY! Sir Derek Jacobi appears later in the series as a professor who is desperate to save the human race. 'Someone like Derek Jacobi has every right to be a bit brash. But he's just the loveliest man. I didn't bother to tell him that I got his autograph when I was at drama school... '

DALEKS! The robotic pepperpots return in a story set in J Thirties Manhattan. 'It was only the production team who got to go to New York. We were in some ghastly location where we got rained a on while they were all having a rather nice time.'

RUMOURS! The return of a classic monster? 'Something from the Sixties is Coming back, which will be very exciting. But I think I may have already said too much!'