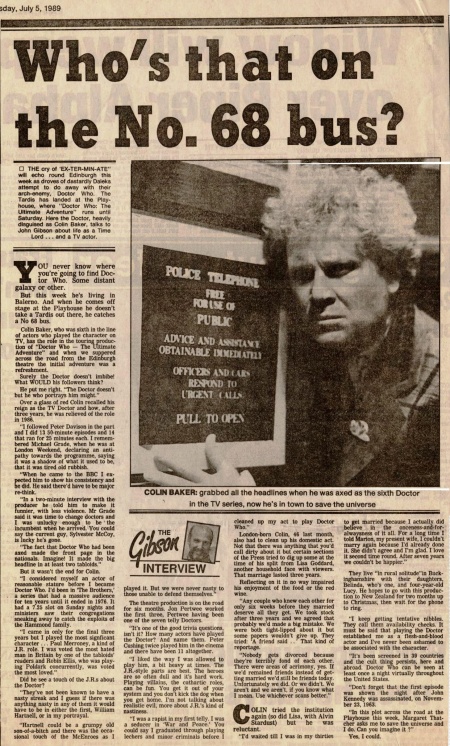 THE cry of 'EX-TER-MIN-ATE" will echo round Edinburgh this week as droves of dastardly Daleks attempt to do away with their arch-enemy, Doctor Who. The Tardis has landed at the Playhouse, where "Doctor Who: The Ultimate Adventure" runs until Saturday. Here the Doctor, heavily disguised as Colin Baker, talks to John Gibson about life as a Time Lord ... and a TV actor.

OU never know where you're going to find Doctor Who. Some distant galaxy or other.

But this week he's living in Balerno. And when he comes off stage at the Playhouse he doesn't take a Tardis out there, he catches a No 68 bus.

Colin Baker, who was sixth in the line of actors who played the character on TV, has the role in the touring production of "Doctor Who — The Ultimate Adventure" and when we suppered across the road from the Edinburgh theatre the initial adventure was a refreshment.

Surely the Doctor doesn't imbibe! What WOULD his followers think?

He put me right. "The Doctor doesn't but he who portrays him might."

Over a glass of red Colin recalled his reign as the TV Doctor and how, after three years, he was relieved of the role in 1986.

"I followed Peter Davison in the part and I did 13 50-minute episodes and 14 that ran for 25 minutes each. I remembered Michael Grade, when he was at London Weekend, declaring an antipathy towards the programme, saying it was a shadow of what it used to be, that it was tired old rubbish.

"When he came to the BBC I expected him to show his consistency and he did. He said there'd have to be major re-think.

"In a two-minute interview with the producer he told him to make it funnier, with less violence. Mr Grade said it was time to change doctors and I was unlucky enough to be the incumbent when he arrived. You could say the current guy, Sylvester McCoy, is lucky he's gone.

"The fact that Doctor Who had been axed made the front page in the nationals. Imagine! It made the big headline in at least two tabloids."

But it wasn't the end for Colin.

"I considered myself an actor of reasonable stature before I became Doctor Who. I'd been in 'The Brothers,' a series that had a massive audience for ten years until it ended in 1976. It had a 7.25 slot on Sunday nights and ministers saw their congregations sneaking away to catch the exploits of the Hammond family.

"I came in only for the final three years but I played the most signficant character ... Paul Merroney, a kind of J.R. role. I was voted the most hated man in Britain by one of the tabloids' readers and Robin Ellis, who was playing Poldark concurrently, was voted the most loved."

Did he see a touch of the J.R.s about the Doctor?

"They've not been known to have a nasty streak and I guess if there was anything nasty in any of them it would have to be in either the first, William Hartnell, or in my portrayal.

"Hartnell could be a grumpy old son-of-a-bitch and there was the occasional touch of the McEnroes as I played it. But we were never nasty to those unable to defend themselves."

The theatre production is on the road for six months. Jon Pertwee worked the first three, Pertwee having been one of the seven telly Doctors.

"It's one of the good trivia questions, isn't it? How many actors have played the Doctor? And name them. Peter Cushing twice played him in the cinema and there have been 11 altogether.

"I liked the way I was allowed to play him, a bit heavy at times. The J.R.-style parts are best. The heroes are so often dull and it's hard work. Playing villains, the cathartic roles, can be fun. You get it out of your system and you don't kick the dog when you get home. I'm not talking about realistic evil, more about J.R.'s kind of nastiness.

"I was a rapist in my first telly. I was a seducer in War and Peace.' You could say I graduated through playing lechers and minor criminals before I cleaned up my act to play Doctor Who."

London-born Colin, 46 last month, also had to clean up his domestic act. Not that there was anything that you'd call dirty about it but certain sections of the Press tried to dig up some at the time of his split from Lisa Goddard, another household face with viewers. That marriage lasted three years.

Reflecting on it in no way impaired his enjoyment of the food or the red wine.

"Any couple who knew each other for only six weeks before they married deserve all they get. We took stock after three years and we agreed that probably we'd made a big mistake. We were both tight-lipped about it but some papers wouldn't give up. They tried: 'A friend said .. ' That kind of reportage.

"Nobody gets divorced because they're terribly fond of each other. There were areas of acrimony, yes. If we'd remained friends instead of getting married we'd still be friends today. Unfortunately we did. Or we didn't. We aren't and we aren't, if you know what I mean. Use whichever scans better."

COLIN tried the institution again (so did Lisa, with Alvin Stardust) but he was reluctant.

"I'd waited till I was in my thirties to get married because I actually did believe in the onceness-and-for-alwaysness of it all. For a long time I told Marion, my present wife, I couldn't marry again because I'd already done it. She didn't agree and I'm glad. I love it second time round. After seven years we couldn't be happier."

They live "in rural solitude" in Buckinghamshire with their daughters, Belinda, who's one, and four-year-old Lucy. He hopes to go with this production to New Zealand for two months up to Christmas, then wait for the phone to ring.

"I keep getting tentative nibbles. They call them availability checks. It must be said that playing the Doctor established me as a flesh-and-blood actor and I've never been ashamed to be associated with the character.

"It's been screened in 39 countries and the cult thing persists, here and abroad. Doctor Who can be seen at least once a night virtually throughout the United States.

"Don't forget that the first episode was shown the night after John Kennedy was assassinated, on November 23, 1963.

"In this plot across the road at the Playhouse this week, Margaret Thatcher asks me to save the universe and I do. Can you imagine it ?"

Caption: COLIN BAKER: grabbed all the headlines when he was axed as the sixth Doctor in the TV series, now he's in town to save the universe