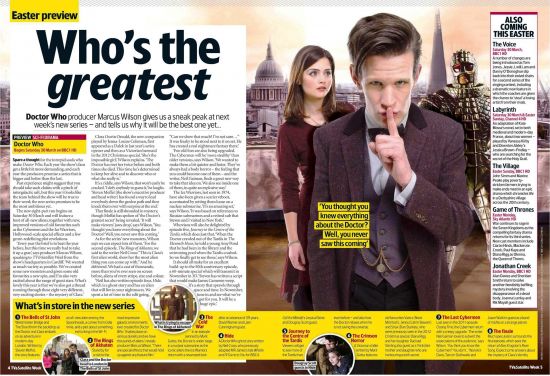 Doctor Who producer Marcus Wilson gives us a sneak peak at next week's new series — and tells us why it will be the best one yet...

Spare a thought for the intrepid souls who make Doctor Who. Each year the show's fans get a little bit more demanding, and each year the producers promise a series that is bigger and better than the last.

Past experience might suggest that you should take such claims with a pinch of intergalactic salt, but this year it looks like the team behind the show will be true to their word; the new series promises to be the most ambitious yet.

The new eight-part run begins on Saturday 30 March and will feature a host of all-new aliens, together with new, improved versions of old favourites such as the Cybermen and the Ice Warriors, Hollywood-scale special effects and a few genre-redefining plot revelations.

'Every year the brief is to beat the year before, but this time we really had to take it up a gear, says producer Marcus Wilson, speaking to TV&Satellite Week from the show's headquarters in Cardiff. 'We wanted as much variety as possible. We've created some new monsters and given some old favourites a new spin, and I'm also very excited about the range of guest stars. What's lovely this year is that we've also got a thread running through these eight very different, very exciting stories — the mystery of Clara:

Clara Oswin Oswald, the new companion played by Jenna-Louise Coleman, first appeared as a Dalek in last year's series opener and then as a Victorian barmaid in the 2012 Christmas special. 'She's the impossible girl, Wilson explains. 'The Doctor has met her twice before and both times she died. This time he's determined to keep her alive and to discover who or what she really is:

It's a riddle, says Wilson, that won't easily be cracked. 'I defy anybody to guess it, he laughs. 'Steven Moffat [the show's executive producer and head writer] has found a way to lead everybody down the garden path and then knock them over with surprise at the end:

That finale is still shrouded in mystery, though Moffat has spoken of 'the Doctor's greatest secret' being revealed. 'It will make viewers' jaws drop: says Wilson. 'You thought you knew everything about the Doctor? Well, you never saw this coming:

As for the series' new monsters, Wilson says we can expect lots of them. Tor the second episode, The Rings of Akhaten, we said to the writer Neil Cross: "This is Clara's first alien world, show her the most alien thing you can come up with." And he delivered. We had a cast of thousands; more than you've ever seen on screen before, aliens of every stripe, size and colour.

'Neil has also written episode four, Hide, which is a ghost story and has an alien that will live in your nightmares. We spent a lot of time in the edit going, "Can we show that much? I'm not sure..." It was freaky to be stood next to it on set. He has created a real nightmare fantasy there:

Two old foes are also being upgraded. The Cybermen will be 'more stealthy' than older versions, says Wilson. 'We wanted to make them a bit quieter and faster. They've always had a body horror — the feeling that you could become one of them — and the writer, Neil Gaiman, finds a great new way to take that idea on. We also see inside one of them, in quite an explosive way:

The Ice Warriors, last seen in 1974, have also been given a scarier reboot, accentuated by setting them loose on a nuclear submarine. 'It's an amazing set: says Wilson. 'It was based on references to Russian submarines and a retired sub that Steven and I visited in New York.'

Whovians will also be delighted by episode five, Journey to the Centre of the Tardis, which does just that. 'When the Doctor crawled out of the Tardis in The Eleventh Hour, he told a young Amy Pond that he had been in the library and the swimming pool when the Tardis crashed. So we finally get to see those; says Wilson.

It should all make for an excellent build-up to the 50th anniversary episode, a 60-minute special which will transmit in November in 3D. 'Steven has written a script that would make James Cameron weep. It's a story that sprawls through space and time. In November, tune in and see what we've got for you. It will be a huge epic."

What's in store in the new series

1 The Bells of St John

Westminster Bridge and The Shard form the backdrop as the Doctor and Clara embark on an adventure in modern-day London. Written by Steven Moffat, the story features an all-new alien enemy, the Spoonheads, a cameo from Celia Imrie, and a plot about something evil lurking in the Wi-Fi.

2 The Rings of Akhaten

Stand by for a visit to the most impressive galactic environments ever created for Doctor Who. 'It takes place on various planets and we have thousands of aliens,' reveals producer Marcus Wilson. 'There are special effects that would hold up against any feature film.'

In an episode penned by Mark Gatiss, the Doctor is under siege in a nuclear submarine as the iconic aliens the Ice Warriors return with a revamped look after an absence of 39 years. David Warner and Dam Cunningham guest.

A Doctor Who ghost story written by Neil Cross, who previously adapted MR James's tale 14Thistle and III Come to You for BBC4. Call the Midwife's Jessica Raine and Dougray Scott guest.

5 Journey to the Centre of the Tardis

Viewers will get to see more of the Tardis than ever before — and also how the Doctor relaxes when he is not saving the universe.

A Victorian chiller written by Mark Gatiss features old favourites Vastra (Neve McIntosh), Jenny (Catrin Stewart) and Strax (Dan Starkey), who were previously seen in the 2012 Christmas special. Diana Rigg and her daughter Rachael Sterling also guest as a Yorkshire mother and daughter who are harbouring a dark secret.

Last seen in the 2011 episode Closing Time, the Cybermen return with a creepy upgrade. 'The writer Neil Gaiman loves to subvert the expectations of the audience,' says Wilson. 'You think you know the Cybermen? You don't.: Warwick Davis, Tamzin Outhwaite and Jason Watkins guest as a band of misfits on a strange planet.

Much speculation surrounds the final episode, which sees the return of Alex Kingston's River Song. Expect some answers about the mystery of Clara's identity.

What is trying to escape in The Rings of Akhaten?