Who's this? Fox doctors up old sci-fi show 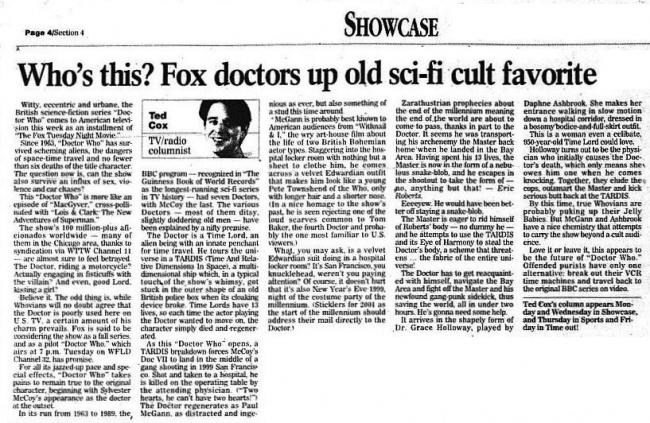 Witty, eccentric and urbane, the British science-fiction series "Doctor Who" comes to American television this week as an installment of "The Fox Tuesday Night Movie."

Since 1963, "Doctor Who" has survived scheming aliens, the dangers of space-time travel and no fewer than six deaths of the title character. The question now is, can the show also survive an influx of sex, violence and car chases?

This "Doctor Who" is more like an episode of "MacGyver," cross-pollinated with "Lois & Clark: The New Adventures of Superman."

The show's 100 million-plus aficionados worldwide - many of them in the Chicago area, thanks to syndication via WTTW Channel 11 - are almost sure to feel betrayed. The Doctor, riding a motorcycle? Actually engaging in fisticuffs with the villain? And even, good Lord, kissing a girl?

Believe it. The odd thing is, while Whovians will no doubt agree that the Doctor is poorly used here on U.S. TV, a certain amount of his charm prevails. Fox is said to be considering the show as a fall series, and as a pilot "Doctor Who," which airs at 7 p.m. Tuesday on WFLD Channel 32, has promise.

For all its jazzed-up pace and special effects, "Doctor Who" takes pains to remain true to the original character, beginning with Sylvester McCoy's appearance as the doctor at the outset.

In its run from 1963 to 1989, the BBC program - recognized in "The Guinness Book of World Records" as the longest-running sci-fi series in TV history - had seven Doctors, with McCoy the last. The various Doctors - most of them ditsy, slightly doddering old men - have been explained by a nifty premise.

The Doctor is a Time Lord, an alien being with an innate penchant for time travel. He tours the universe in a TARDIS (Time And Relative Dimensions In Space), a multidimensional ship which, in a typical touch of the show's whimsy, got stuck in the outer shape of an old British police box when its cloaking device broke. Time Lords have 13 lives, so each time the actor playing the Doctor wanted to move on, the character simply died and regenerated.

As this "Doctor Who" opens, a TARDIS breakdown forces McCoy's Doc VII to land in the middle of a gang shooting in 1999 San Francisco. Shot and taken to a hospital, he is killed on the operating table by the attending physician. ("Two hearts, he can't have two hearts!") The Doctor regenerates as Paul McGann, as distracted and ingenious as ever, but also something of a stud this time around.

McGann is probably best known to American audiences from "Withnail & I," the wry art-house film about the life of two British Bohemian actor types. Staggering into the hospital locker room with nothing but a sheet to clothe him, he comes across a velvet Edwardian outfit that makes him look like a young Pete Townshend of the Who, only with longer hair and a shorter nose. (In a nice homage to the show's past, he is seen rejecting one of the loud scarves common to Tom Baker, the fourth Doctor and probably the one most familiar to U.S. viewers.)

What, you may ask, is a velvet Edwardian suit doing in a hospital locker room? It's San Francisco, you knucklehead, weren't you paying attention? Of course, it doesn't hurt that it's also New Year's Eve 1999, night of the costume party of the millennium. (Sticklers for 2001 as the start of the millennium should address their mail directly to the Doctor.)

Zarathustrian prophecies about the end of the millennium meaning the end of the world are about to come to pass, thanks in part to the Doctor. It seems he was transporting his archenemy the Master back home when he landed in the Bay Area. Having spent his 13 lives, the Master is now in the form of a nebulous snake-blob, and he escapes in the shootout to take the form of - no, anything but that! - Eric Roberts.

Eeeeyew. He would have been better off staying a snake-blob.

The Master is eager to rid himself of Roberts' body - no dummy he - and he attempts to use the TARDIS and its Eye of Harmony to steal the Doctor's body, a scheme that threatens ... the fabric of the entire universe!

The Doctor has to get reacquainted with himself, navigate the Bay Area and fight off the Master and his newfound gang-punks sidekick, thus saving the world, all in under two hours.

It arrives in the shapely form of Dr. Grace Holloway, played by Daphne Ashbrook. She makes her entrance walking in slow motion down a hospital corridor, dressed in a bosomy bodice-and-full-skirt outfit and to the strains of Puccini (having just come from the opera).

This is a woman even a celibate, 950-year-old Time Lord could love.

Holloway turns out to be the physician who initially causes the Doctor's death, which only means she owes him one when he comes knocking. Together, they elude the cops, outsmart the Master and kick serious butt back at the TARDIS.

By this time, true Whovians are probably puking up their Jelly Babies. But McGann and Ashbrook have a nice chemistry that attempts to carry the show beyond a cult audience.

"Great," Holloway says, "I finally meet the right guy and he's from another planet."

Love it or leave it, this appears to be the future of "Doctor Who." Offended purists have only one alternative: break out their VCR time machines and travel back to the original BBC series on video.

Ted Cox's column appears Monday and Wednesday in Showcase, and Thursday in Sports and Friday in Time out!