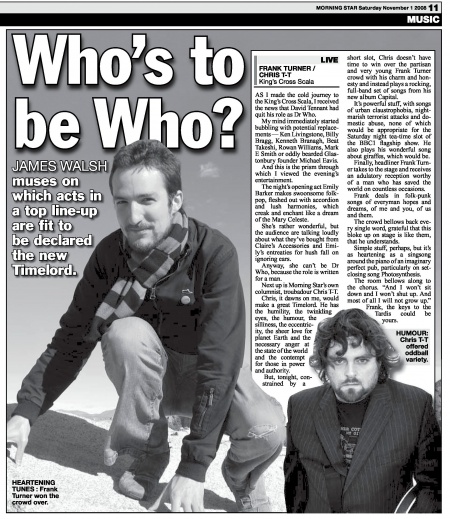 AS I made the cold journey to the King's Cross Scala, I received the news that David Tennant had quit his role as Dr Who.

And this is the prism through which I viewed the evening's entertainment.

The night's opening act Emily Barker makes swoonsome folk-pop, fleshed out with accordion and lush harmonies, which creak and enchant like a dream of the Mary Celeste.

She's rather wonderful, but the audience are talking loudly about what they've bought from Claire's Accessories and Emily's entreaties for hush fall on ignoring ears.

Anyway, she can't be Dr Who, because the role is written for a man.

Next up is Morning Star's own columnist, troubadour Chris T-T.

Chris, it dawns on me, would make a great Timelord. He has the humility, the twinkling eyes, the humour, the silliness, the eccentricity, the sheer love for planet Earth and the necessary anger at the state of the world and the contempt for those in power and authority.

But, tonight, constrained by a short slot, Chris doesn't have time to win over the partisan and very young Frank Turner crowd with his charm and honesty and instead plays a rocking, full-band set of songs from his new album Capital.

It's powerful stuff, with songs of urban claustrophobia, nightmarish terrorist attacks and domestic abuse, none of which would be appropriate for the Saturday night tea-time slot of the BBC1 flagship show. He also plays his wonderful song about giraffes, which would be.

Finally, headliner Frank Turner takes to the stage and receives an adulatory reception worthy of a man who has saved the world on countless occasions.

Frank deals in folk-punk songs of everyman hopes and dreams, of me and you, of us and them.

The crowd bellows back every single word, grateful that this bloke up on stage is like them, that he understands.

Simple stuff, perhaps, but it's as heartening as a singsong around the piano of an imaginary perfect pub, particularly on set-closing song Photosynthesis.

The room bellows along to the chorus. "And I won't sit down and I won't shut up. And most of all I will not grow up." Frank, the keys to the

Tardis could be yours.